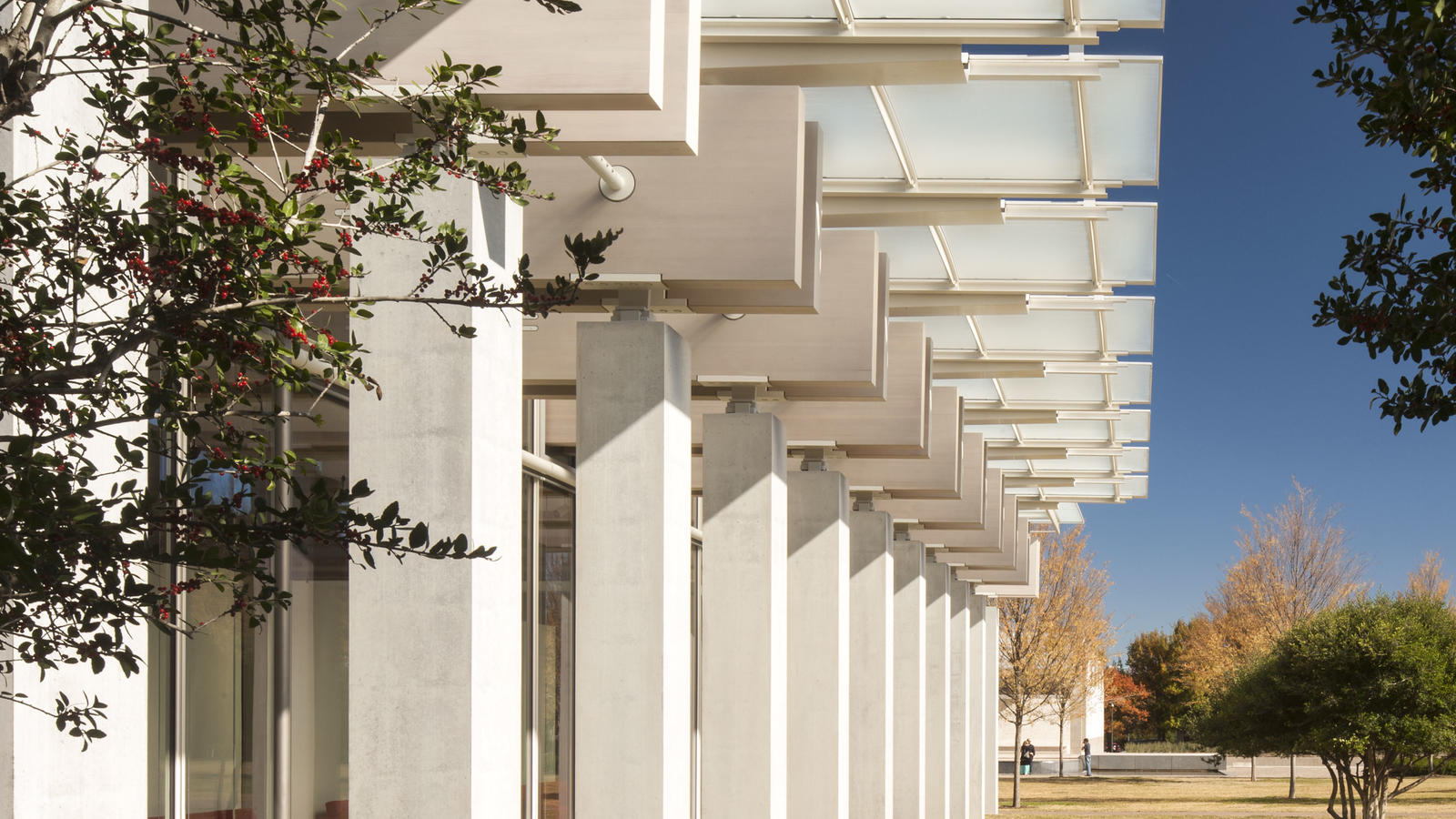 Surrounded by elms and red oaks, Renzo Piano’s colonnaded pavilion stands as an expression of simplicity and lightness—glass, concrete, and wood—some sixty-five yards to the west of Louis I. Kahn’s signature cycloid-­vaulted museum of 1972.

Piano’s low-slung, colonnaded pavilion with overhanging eaves graciously acknowledges Kahn’s museum building by way of its kindred height, emphasis on natural light, and use of concrete as a primary material. The positioning of the pavilion on the site focuses attention on the west facade of the Kahn Building, which Kahn considered to be the main entrance.

The pavilion is made up of two sections connected by a glass passageway. The front, or easternmost, section conveys an impression of weightlessness: a glass roof system seems to float high above wooden beams and concrete posts. Sleek, square concrete columns flank the central, recessed glass entrance and wrap around three sides of the building. The tripartite facade articulates the interior, with a spacious entrance lobby and large galleries to the north and south.

Tucked under a green roof, the Piano Pavilion’s western section contains a gallery for light-sensitive works of art, three education studios, a large library with reading areas, and an auditorium with superior acoustics for music. The latter, located below ground level, is a design centerpiece: its raked seating faces the stage and the dramatic backdrop of a light well animated by shifting patterns of natural light. 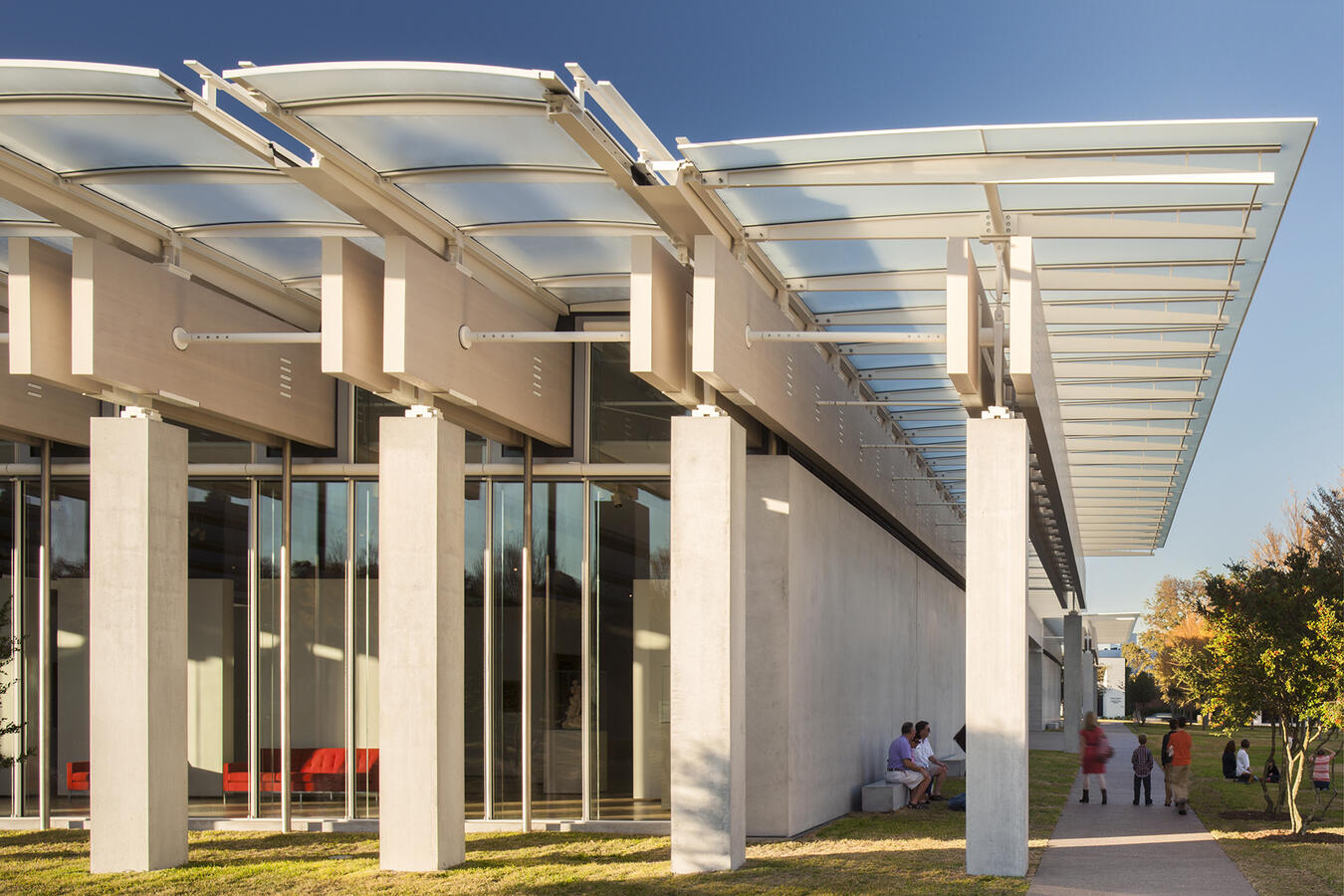 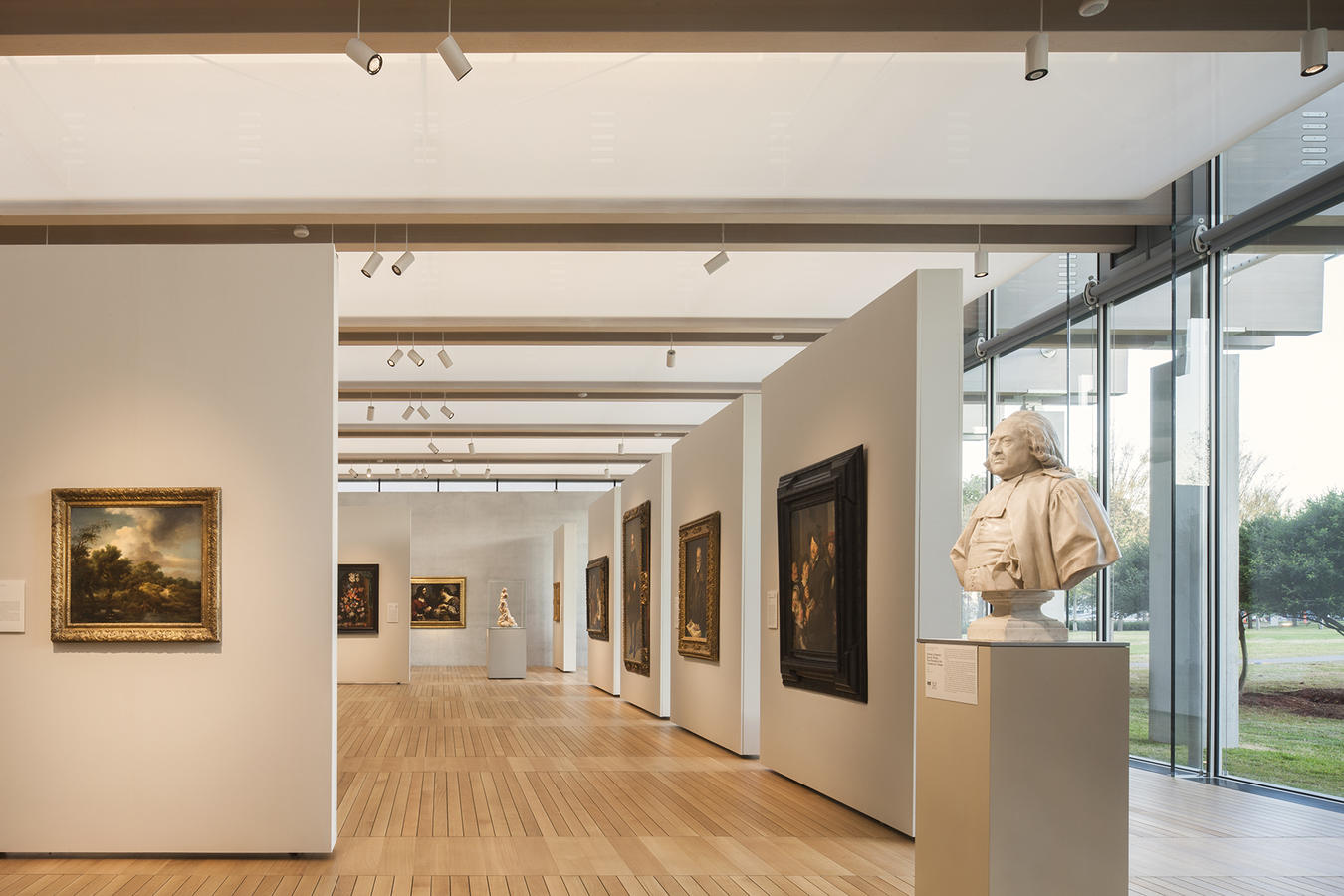 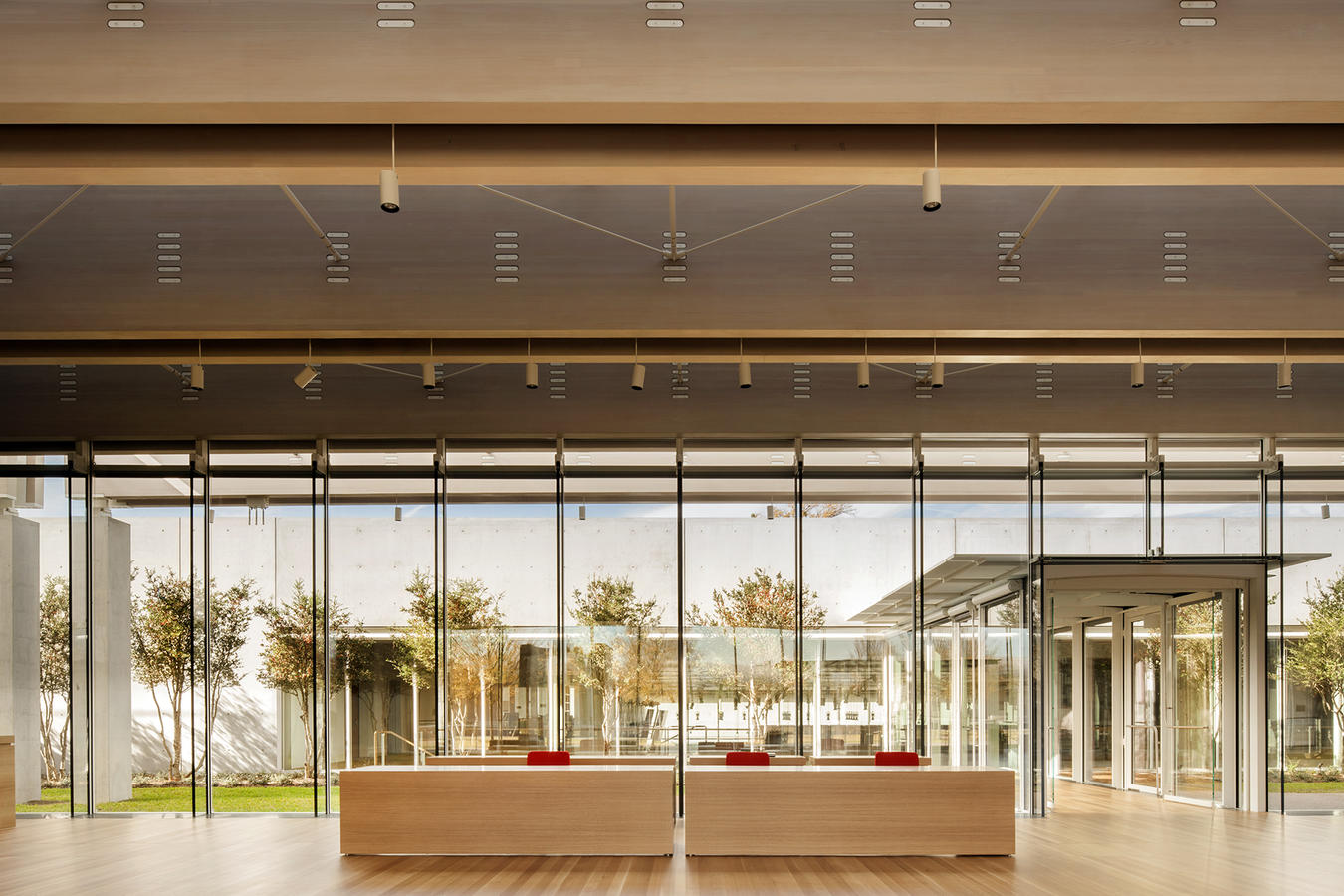 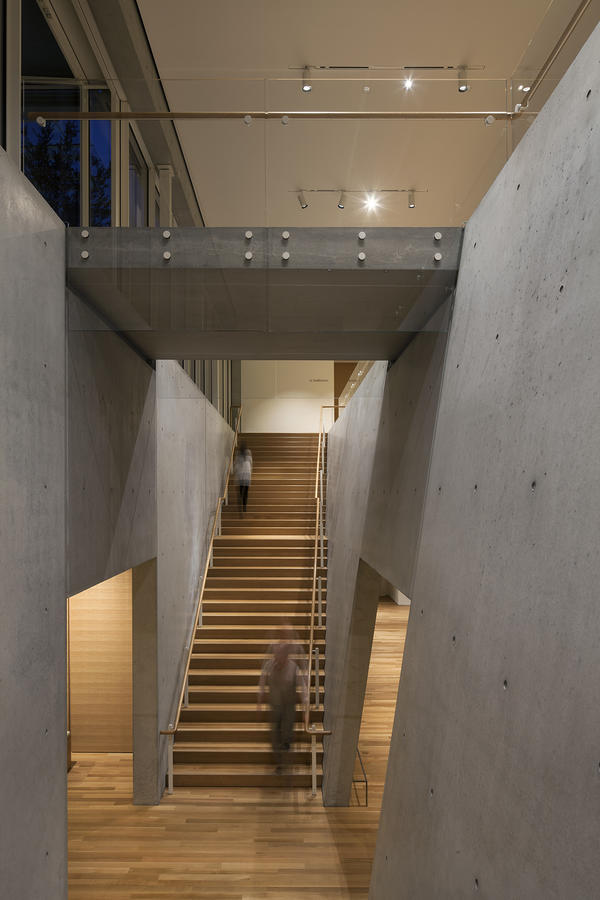 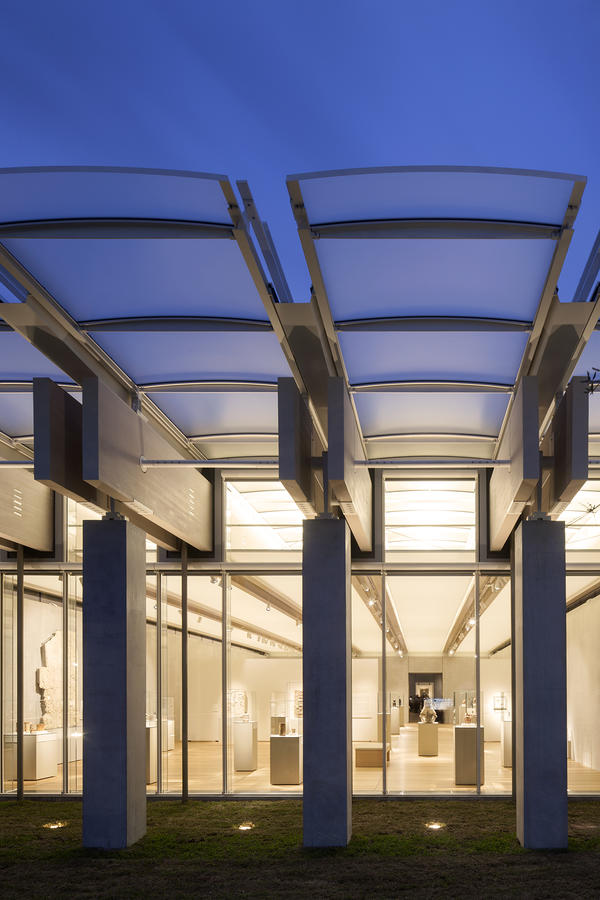 The Pavilion at the Kimbell Art Museum, 2013

Kahn: Piano – The Piano Pavilion at the Kimbell Art Museum, 2013. By Ultan Guilfoyle 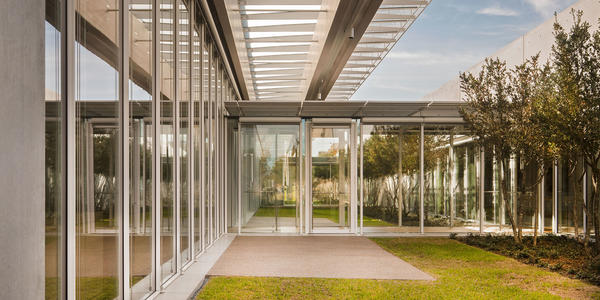 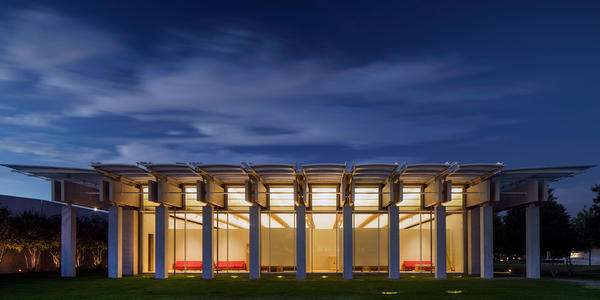 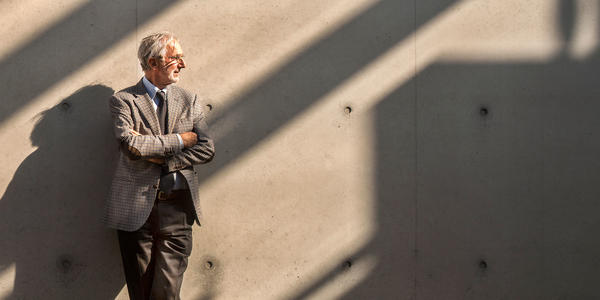 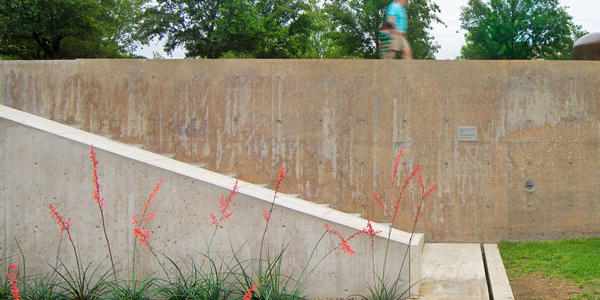 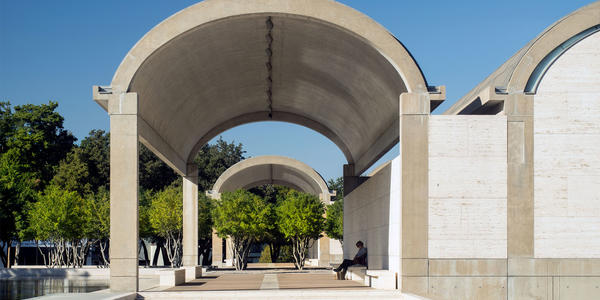 ARCHITECTURE
Louis I. Kahn Building
Back to top