Jacques-Louis David, the leading Neoclassical painter in Europe during the French Revolution and under Napoleon, took exile in Brussels after the Battle of Waterloo in 1815. There he painted and exhibited The Anger of Achilles, which he prized highly as the culmination of his career-long efforts to recapture the perfection of ancient Greek art.

The complex episode, which challenged David to render a spectrum of interacting emotions from stoic courage and calm, heroic resolve to grief and anger, is drawn from Euripides’ tragedy Iphigenia in Aulis and Racine’s seventeenth-century dramatic version of the same story. Agamemnon, king of the Greeks, has just revealed to the youthful Achilles that his daughter Iphigenia is not to be married to him but sacrificed in order to appease the goddess Diana and so allow the Greek fleet to set sail for Troy. As Iphigenia’s mother, Clytemnestra, looks on tearfully, Achilles angrily reaches for his sword. In David’s treatment of the subject, Agamemnon’s magnetic gaze and authoritative gesture appear to freeze Achilles’ outburst. Apparently dressed as a bride, the angelic-looking Iphigenia clutches her heart, oblivious to the display of male confrontation. Her mother’s reaction, composed of disappointment at Achilles’ inability to act as well as grief for her daughter, is apparently intended to mirror the mixed reactions that any spectator must feel as filial, spousal, and civic duties compete with one another.

Adult: The Anger of Achilles

It seems that David would first establish the underlying forms of the figures’ bodies before clothing them. Even in details, such as the eyes, the artist followed this principle. He first rendered Agamemnon’s eyes, then painted the eyelids over them, which gives them the convincing illusion of three-dimensionality.

There are numerous minor changes in The Anger of Achilles that occurred at a fairly late stage. The basic composition had already been established at this point, and David was refining the costumes and accessories. The most prominent change is the covering of Agamemnon’s bare shoulder with a red cloak secured by a gold coin clasp. This pentimento can be seen with the naked eye as dark diagonal streaks perpendicular to the red drapery’s folds. The decoration and shape of Achilles’ strap was changed from an oval-link strap studded with alternating diamond and oval-shaped gems to a straight-sided strap with a meander motif. The gold border of his robe was, in turn, transformed from a meander to a stepped pattern. David also shifted the position of Iphigenia’s eyes, possibly to heighten the poignancy of her emotional state. 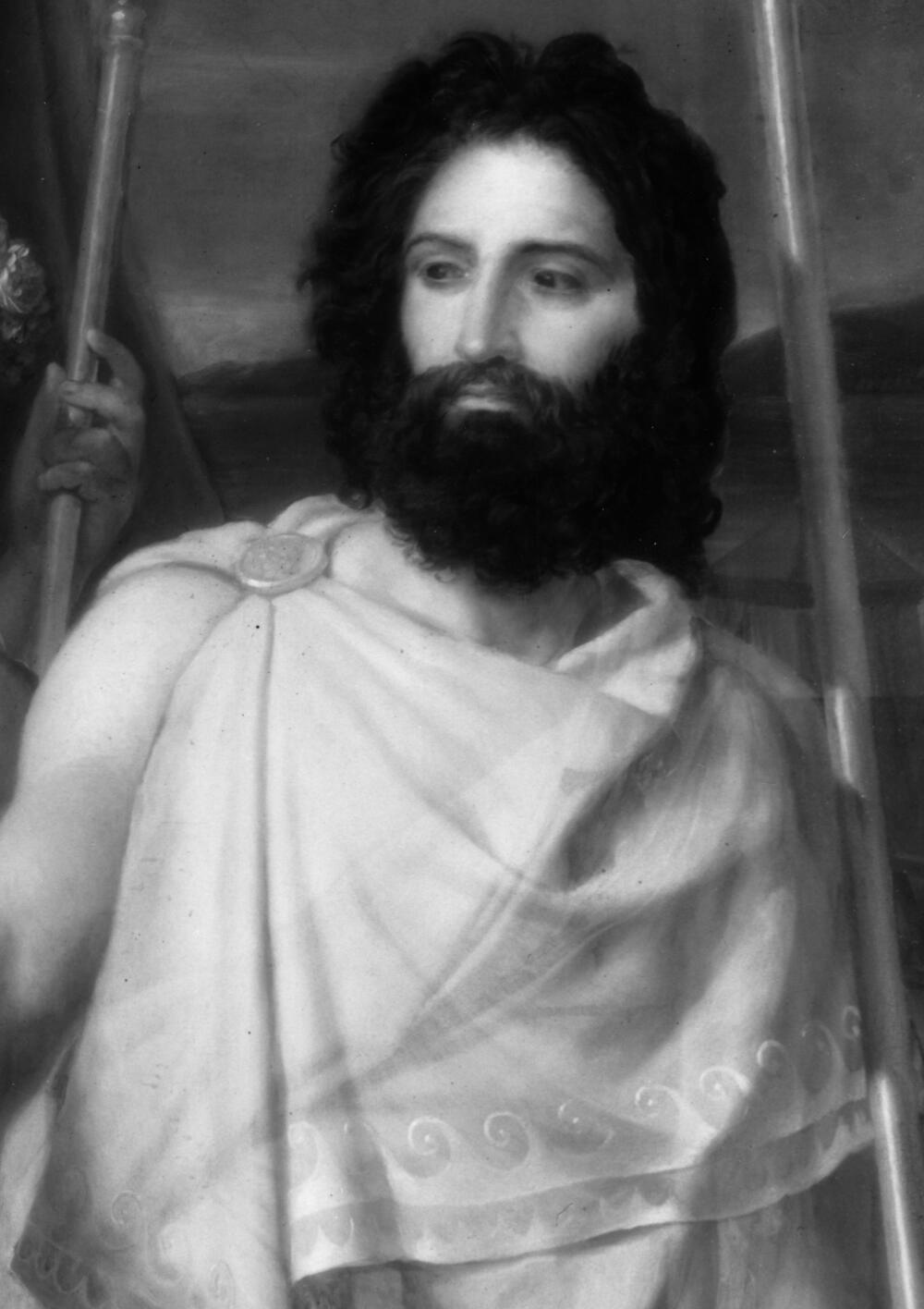 Infrared detail of the changes in Agamemnon's drapery

J. Naigeon, curator of the Galerie du Luxembourg, Paris, until 1830.