The leading religious painter of Seville and a great master of Spain’s golden age, Murillo was one of the most celebrated of all European artists until his reputation was eclipsed by those of Velázquez and El Greco in the late nineteenth century.

Murillo’s rare and unusual genre scenes, which have always enjoyed great popularity, have no real precedent in Spain. His scenes of contemporary street life defy simple interpretation. Four Figures on a Step accosts the viewer, who is insinuated into a scene with an unsettling cast of characters. The young woman beside the smiling young man twists her face into a wink as she lifts up the scarf over her head. While this latter gesture had alluded to marital fidelity since classical times, in this context it may instead signal her availability. Some scholars have interpreted the Kimbell picture as a scene of procurement, with the older woman identified as a procuress, the celestina of Spanish picaresque literature, who is often represented as a crone wearing glasses and a headscarf. She protectively cradles the head of a boy whose torn breeches reveal his backside––a detail that had twice been covered with repaint but is now restored to its original state.

On the other hand, the mature woman also resembles the bespectacled characters in Dutch and Flemish genre paintings, among them virtuous women inspecting the heads of children for lice. In these works which Murillo knew through prints, delousing a child served as a metaphor for cleansing the soul, as well as the body. If not simply a portrayal of the colorful characters to be found in the streets of Seville, Four Figures on a Step may carry an admonitory, moralizing message, urging the viewer to avoid the temptations of worldly pleasures.

Adult: Four Figures on a Step

The 1984 cleaning of Four Figures on a Step led to the discovery that in a previous restoration the appearance of the painting had been altered in two significant ways. The composition had been extended with a canvas strip, of approximately four inches (10 cm), along the left side. This addition made the composition appear more symmetrical by completing the figure of the young man. The other major change was the overpainting of the ragged hole in the seat of the child’s trousers, which had been applied to conceal his bare bottom. Restoration included the removal of these two alterations, which restored Murillo’s original conception and sparked an ongoing discussion about the meaning and interpretation of the genre scene. Views vary widely between reading Four Figures on a Step as a scene of procurement and one of charity. 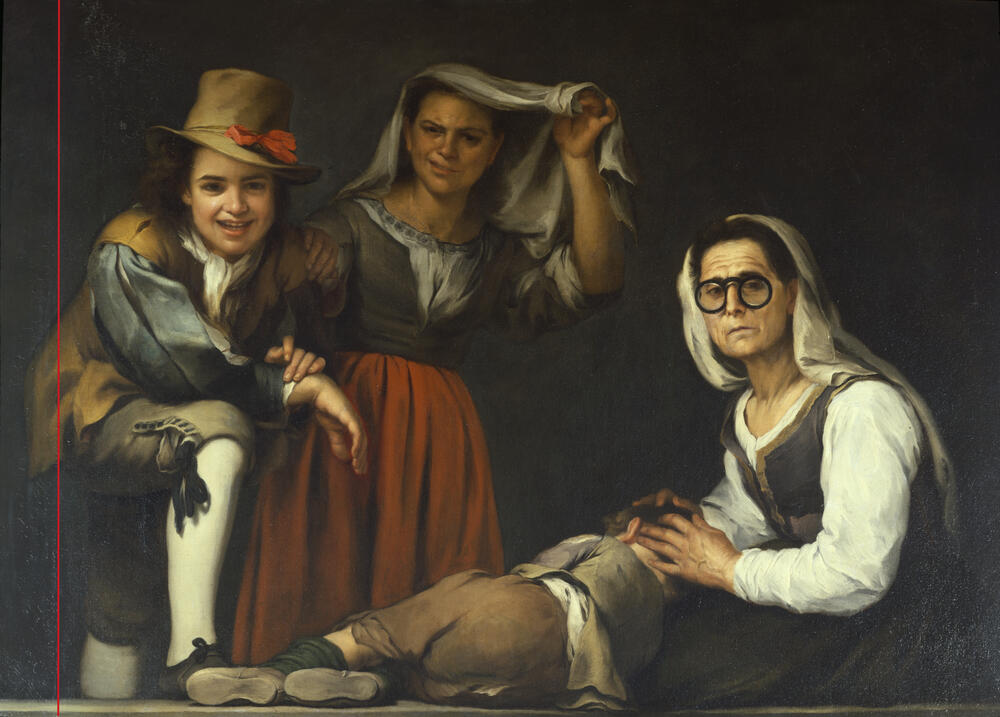