Coming nearly at the end of Matisse’s long career, L’Asie culminates his obsession with painting the female figure in rich, exotic costumes and settings. In the work’s title he was perhaps alluding to a well-established tradition in European art in which female figures were used to symbolize each of the continents. Or it may have been suggested by one of his favorite costumes, a Chinese coat lined with white fur from a Siberian tiger, here rendered in violet and blue and worn over a haute-couture striped gown. While the golden ocher skin tones of the model are characteristic of Asian peoples, the model apparently came from the Congo. Moreover, her eyes are blue and green, as if reflecting the colored beads of her necklace.

Matisse worked on L’Asie between his return to the hill town of Vence, in the south of France, in late November 1945, and his departure for Paris in June 1946. It was painted in his studio at the Villa Le Rêve. The thinly painted surface of the work and its fluid drawing give an appearance of effortlessness that masks the painstaking efforts Matisse in fact put into its creation. An earlier state of the composition—with a black quadrant in the lower left, enlivened by arabesque lines, and a signature and date of 1946 scratched into the paint, revealing the white ground beneath—is recorded in a photograph. In its finished state, Matisse converted the black quadrant to a flaming red, unifying the background as a decorative space, and redrew the arabesque lines, as well as his signature and the date, with black crayon. The earlier state of L’Asie documented in the photograph may have been only one of several revisions before he brought the painting to its brilliant conclusion. He wrote in 1948: “I have always tried to hide my own efforts and wanted my work to have the lightness and joyousness of a springtime which never lets anyone suspect the labors it has cost.”

Traces of an earlier state of the picture, which Matisse signed and dated 1946, were uncovered during an infrared examination. This state corresponds to a black-and-white photograph of L’Asie published in Alfred Barr’s 1951 book, Matisse: His Art and His Public. The photograph shows L’Asie with a black quadrant in the lower left, enlivened by arabesque lines, and a signature and date that were scratched into the paint revealing the brilliant white ground. In L’Asie’s finished state, Matisse converted this area to a flaming red, thereby unifying the background as a decorative space, and redrew the arabesque lines as well as his signature and the date with black crayon. This revision is first recorded in the October 1948 issue of Verve devoted to the artist’s paintings in Vence.The artist probably revised L’Asie several times before bringing the painting to its brilliant conclusion. Matisse’s studied and meticulous working methods often included erasing earlier passages to maintain the spontaneous appearance of his paint surface. This version has particular significance due to the fact that is was signed and dated, as well as photographed. The nature of Matisse’s revisions in L’Asie may reflect his new fascination with cutouts, beginning in 1943, to which the artist would devote his energies in his last years, while also anticipating the radiant red Vence interiors of his last great series of paintings. 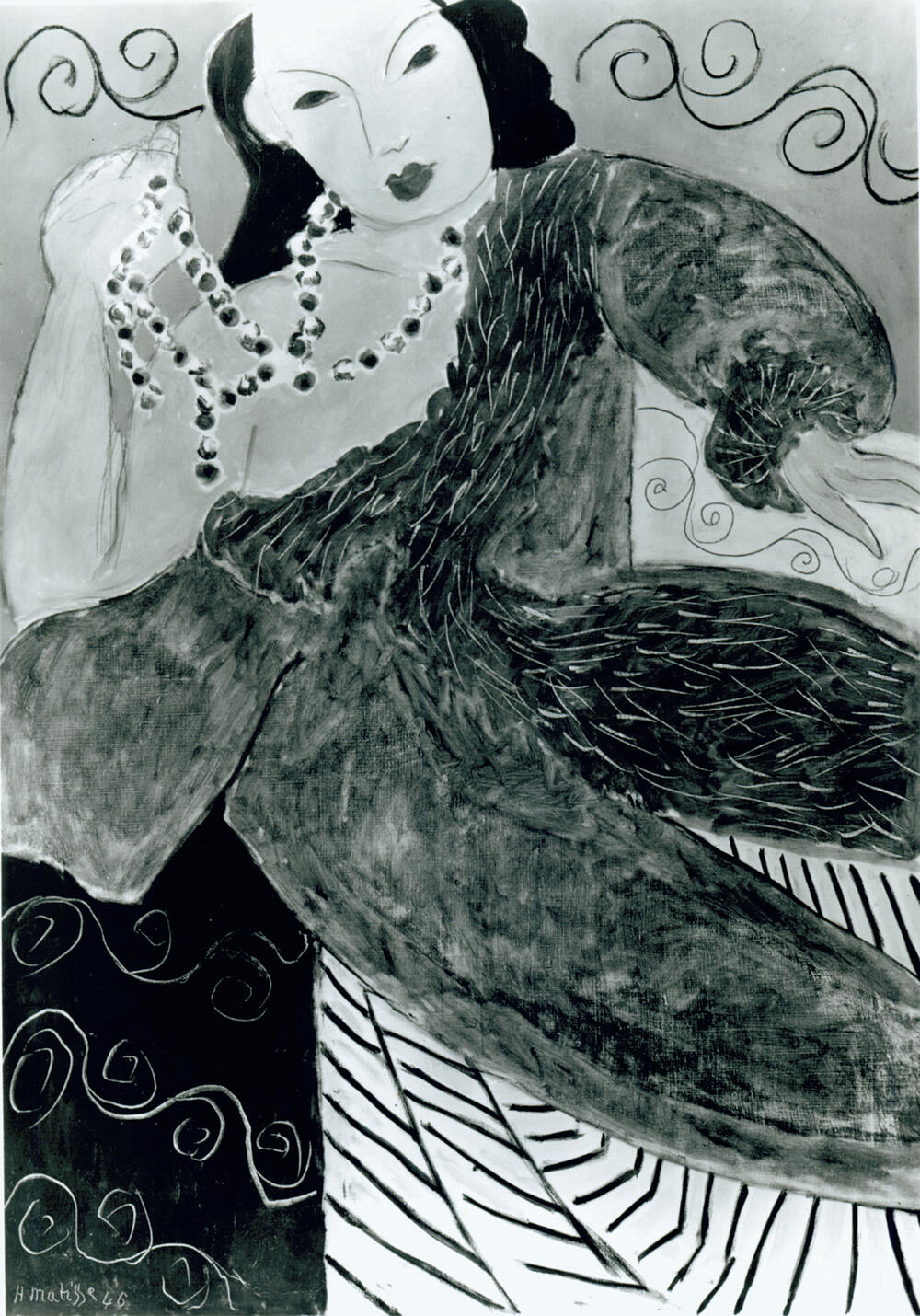 Black and white photograph of an earlier version of L'Asie from the Matisse archives. Collection of Claude Duthuit