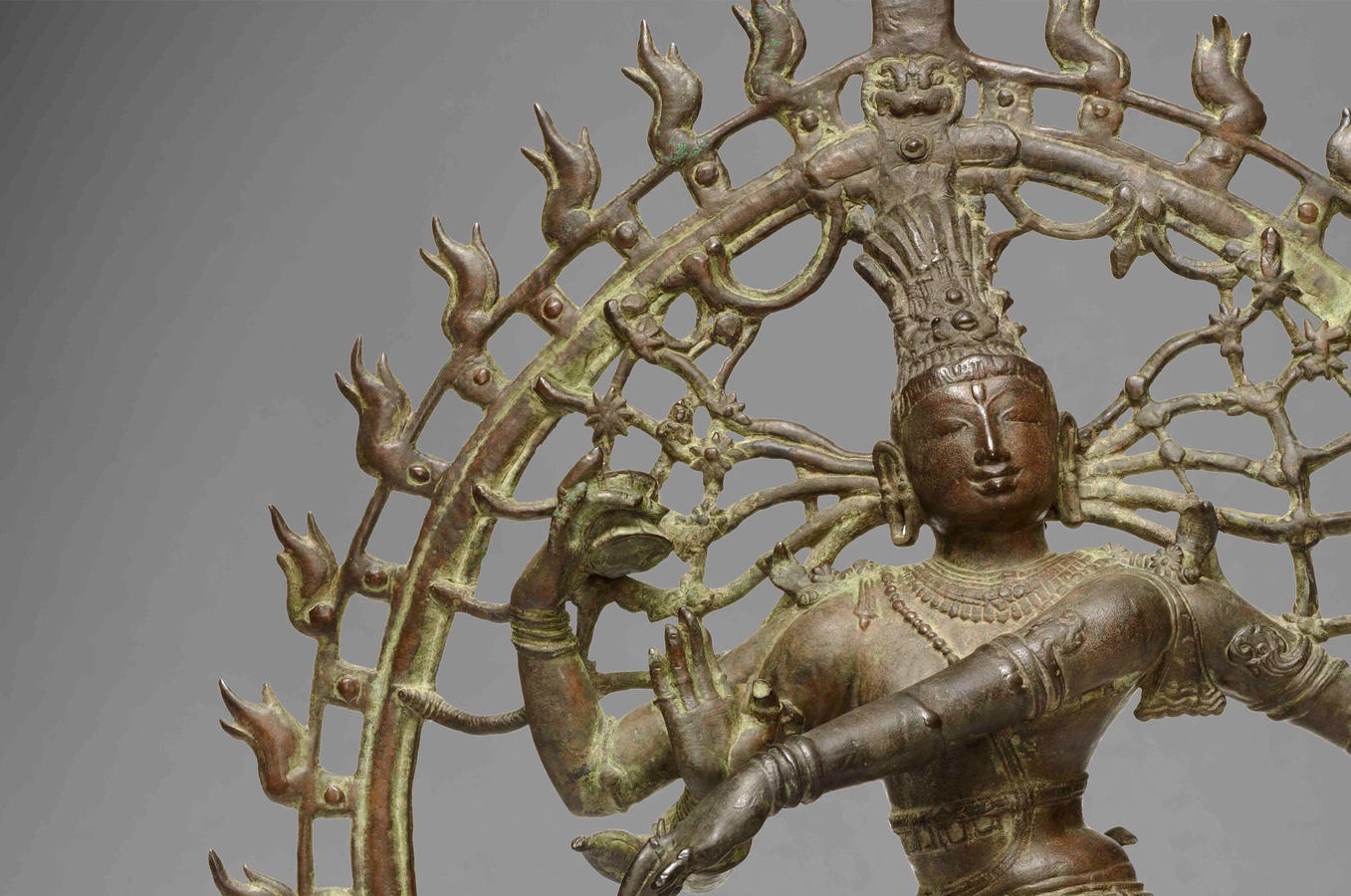 The Kimbell Art Museum presents Buddha, Shiva, Lotus, Dragon: The Mr. and Mrs. John D. Rockefeller 3rd Collection at Asia Society, on view June 27 through September 5, 2021. Co-organized by the American Federation of Arts and Asia Society Museum, this exhibition showcases the extraordinary range of sculptures, bronzes, ceramics and metalwork that John D. Rockefeller 3rd (1906–1978) and his wife, Blanchette Hooker Rockefeller (1909–1992), thoughtfully assembled between the 1940s and the 1970s.

“We are thrilled to welcome this extraordinary collection to Fort Worth,” said Eric M. Lee, director of the Kimbell Art Museum. “The breadth and diversity of works representing many cultures across Asia are a testament to the Rockefellers’ vision of promoting cross-cultural understanding and respect—a charge that remains important and relevant today.”

This exhibition also represents a special opportunity for museum visitors to experience the unparalleled quality of the Mr. and Mrs. John D. Rockefeller 3rd Collection outside its home at Asia Society Museum in New York City. In addition to investigating themes of Buddhist sculpture, Hindu sculpture and East Asian ceramics and metalwork, the show examines the Rockefellers’ connoisseurship as well as their collecting and exhibition practices in an age when political and economic circumstances shaped the reception and availability of Asian artworks in the United States.

Buddha, Shiva, Lotus, Dragon: The Mr. and Mrs. John D. Rockefeller 3rd Collection at Asia Society is the fifth exhibition of Asian art at the Kimbell Art Museum in the last 20 years, following the recent exhibitions From the Lands of Asia: The Sam and Myrna Myers Collection (2018) and Samurai: Armor from the Ann and Gabriel Barbier-Mueller Collection (2014).

“Every piece in the exhibition is an absolute jewel,” said Jennifer Casler Price, curator of Asian, African and Ancient American art at the Kimbell Art Museum. “This show is a wonderful opportunity to explore a concentrated and superb selection of outstanding artworks from one of the greatest collections in the world.”

“Within the range of themes, cultures, periods and styles that are represented, there is something of wonder and discovery for everyone—whether you’re familiar with Asian art or are seeing these fascinating and remarkable works for the first time,” Casler Price noted.

Emphasizing beauty, the balance between ingenuity and tradition, and an awareness of the faiths its objects represent, Buddha, Shiva, Lotus, Dragon: The Mr. and Mrs. John D. Rockefeller 3rd Collection at Asia Society manifests the dynamic ideas and philosophies that animate the many histories of Asian art. At the same time, it attests to the Rockefellers’ vision of promoting deep cross-cultural understanding through direct encounters with astonishing works of art.

When John D. Rockefeller 3rd and his wife, Blanchette Hooker Rockefeller, began collecting Asian art in the years after World War II, they chose to prioritize classical masterpieces that represented the great technical skill and creative breadth of Asian artistic practice. From the start, the couple believed that sharing this grouping of exceptional artworks with the public could act as a catalyst for increasing understanding of Asian cultures and create the foundation for future economic and sociopolitical engagement between the United States and the countries of Asia. They selected objects from across the continent—Cambodia, China, India, Japan, Nepal, Sri Lanka, Thailand, Tibet and Vietnam—ranging from everyday food wares to imperial dining vessels and from ceremonial Buddhist statuary to private devotional Hindu sculptures. These artworks come from a range of cultural contexts and reflect the diversity of Asia and its vast artistic achievements.

John D. Rockefeller 3rd was raised in homes where his mother, Abby Aldrich Rockefeller, sought to recreate the atmosphere she had admired during her travels to Asia, particularly the serene balance of Buddhist temples. The opening section of the exhibition, Buddhist Sculpture, includes works that capture the beauty and compassionate ideals embodied by the Buddhist art of Asia.

Superb South Asian bronzes and stone sculptures of the ancient region of Gandhara, the Gupta period and the Pala period demonstrate styles that had a profound impact on the arts of East and Southeast Asia, as Buddhism was transmitted across the continent, from India in the south to Japan in the north, over hundreds of years. Nepalese, Sri Lankan, Thai, Cambodian, Chinese and Japanese works reflect both these stylistic traditions and transformations. A splendid stone head of a Buddha fashioned in the late second to early third century by sculptors in Gandhara is a classic example of the earliest images of the Buddha, with almost Grecian facial features that reflect Gandhara’s status as a crossroads where East met West.

Rockefeller was equally drawn to the sensual aesthetic of Hindu sculpture. Another section of the exhibition, Hindu Sculpture, features a number of outstanding pieces the Rockefellers acquired from India and Cambodia Among the striking selection of five Chola-period bronzes is a magnificent image of the Hindu god Shiva as Lord of the Dance (Shiva Nataraja), dating to around 970. Exemplary among several monumental Southeast Asian sculptures is a Khmer sandstone image of a four-armed Shiva that features the smooth body and fine details found in the best carved figures of the Angkor period, from the late 10th or early 11th century.

The collectors shared wide-ranging tastes, which the Ceramics and Metalwork section of the exhibition will reveal. Like his father, John D. Rockefeller 3rd passionately collected Chinese porcelains, particularly from the Ming dynasty (1368–1644) and the Kangxi period of the Qing dynasty (1662–1722), though the son formed a broader appreciation of East Asian ceramics than had the father. An impeccable blue-and-white 15th-century flask decorated with dragons epitomizes the finest porcelains used at the Ming court as gifts from the emperor to his attendants and to foreign rulers and dignitaries.

Demonstrating the Rockefellers’ diverse but discerning taste in Japanese ceramics, sophisticated Arita wares represent some of the most esteemed Japanese porcelains ever exported to the West, and Mino wares and Kyoto wares reflect aesthetics tied to the tea ceremony. One remarkable example, a large tea-leaf storage jar decorated with a group of crows, can be attributed to Nonomura Ninsei, one of only a handful of 17th-century potters whose name is now known.

Rounding out this section of the exhibition, a splendid Chinese bronze food vessel (gui) from the sixth century BC and an elegant seventh-to-eighth-century Tang dynasty silver stem cup represent high points of the metalworking tradition in China. These two objects reveal both local innovations and the stylistic impact of international exchange of goods and ideas, the time-honored concepts the Rockefellers endeavored to emphasize through their collecting of Asian art.

This exhibition is co-organized by the American Federation of Arts and Asia Society Museum. The national tour of the exhibition is supported in part by a grant from the National Endowment for the Arts. Promotional support is provided by American Airlines, NBC 5 and PaperCity.

Admission to Buddha, Shiva, Lotus, Dragon: The Mr. and Mrs. John D. Rockefeller 3rd Collection at Asia Society is $18 for adults, $16 for seniors and students, $14 for ages 6–11, and free for children under 6. Admission is half-price all day on Tuesdays and after 5 p.m. on Fridays.

Tickets are $3 for Supplemental Nutrition Assistance Program (SNAP) recipients and all family members present with a valid SNAP Card. Additional discounts do not apply. Reduced admission tickets are available with valid ID exclusively at the museum box office.

Tickets are available at the museum box office and on the museum’s website, kimbellart.org.

A fully illustrated catalogue written by Adriana Proser, the Mr. and Mrs. Thomas Quincy Scott Curator of Asian Art at the Walters Art Museum and the former John H. Foster Curator for Traditional Asian Art at Asia Society Museum, will accompany the exhibition. The catalogue is available for $50 in hardcover at the Museum Shops or online at kimbellart.org.

The museum’s 1972 building, designed by the American architect Louis I. Kahn, is widely regarded as one of the outstanding architectural achievements of the modern era. A second building, designed by Italian architect Renzo Piano, opened in 2013 and now provides space for special exhibitions, dedicated classrooms and a 289-seat auditorium with excellent acoustics for music. For more information, visit kimbellart.org.

ABOUT THE AMERICAN FEDERATION OF ARTS
The American Federation of Arts is the leader in traveling exhibitions internationally. A nonprofit institution founded in 1909, the AFA is dedicated to enriching the public’s experience and understanding of the visual arts through organizing and touring art exhibitions for presentation in museums around the world, publishing exhibition catalogues featuring important scholarly research and developing educational programs.

ABOUT ASIA SOCIETY MUSEUM
Asia Society Museum presents a wide range of traditional, modern and contemporary exhibitions of Asian and Asian American art, taking new approaches to familiar masterpieces and introducing under-recognized arts and artists. The Asia Society Museum Collection comprises a traditional art collection, including the initial bequests of Mr. and Mrs. John D. Rockefeller 3rd, and a contemporary art collection. Through exhibitions and public programs, Asia Society provides a forum for the issues and viewpoints reflected in both traditional and contemporary Asian art, and in Asia today.