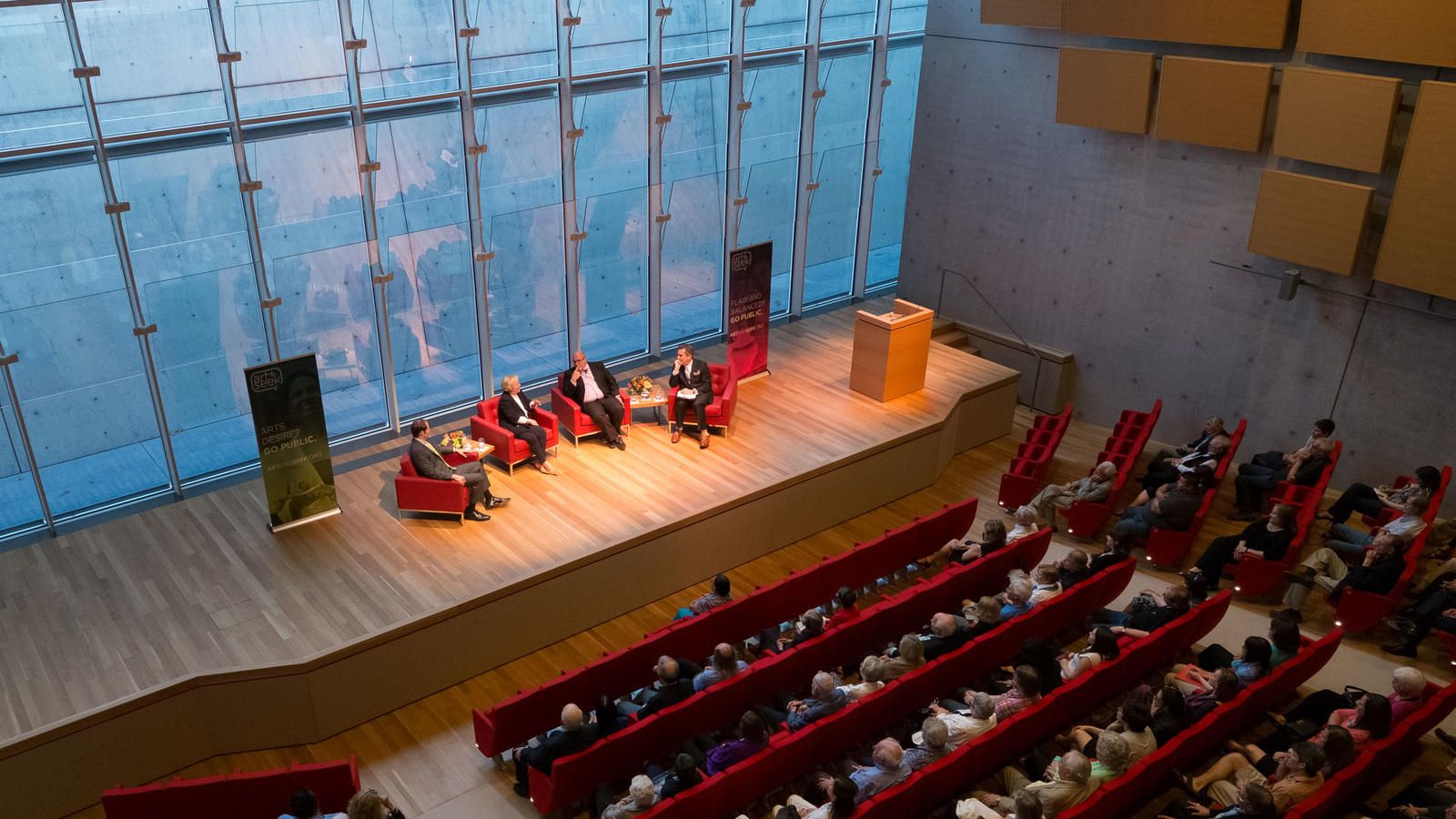 On Friday, May 7, KERA’s Art&Seek and the Kimbell Art Museum present "What We’ve Gained in a Year of Loss—and What’s Next," a live online State of the Arts discussion.

Looking back on a year when we lost so much, Fort Worth’s creative community reflects on challenges and changes across genres and how we engage with art in this time of social distancing. Join us for a conversation celebrating innovation and resilience as we explore what the future holds.

State of the Arts Fort Worth, produced by KERA’s Art&Seek and the Kimbell Art Museum, identifies important trends and issues affecting North Texas arts organizations. It brings artists, experts and arts leaders together for a thought-provoking, one-hour conversation.

This free one-hour event begins at noon. Bookmark this link to attend the conversation. For more information, visit kimbellart.org.

Dhananjaya “DJ” Perera is a Sri Lankan artist and art educator based in Fort Worth. As an artist, Perera’s primary focus has been on painting, with psychedelic pours and abstract imagery revolving around his Sri Lankan heritage. Recently, however, his works have transitioned toward highly detailed, achromatic pointillism drawings, which have attracted attention and acclaim within the art community. His recent accolades include placing second in the drawing category for the eighth annual juried art exhibit by the Tarrant County Black Historical and Genealogical Society. In November 2020, Perera’s 117 Hours was donated to the Mary Couts Burnett Library at Texas Christian University, making him the first Sri Lankan artist to be included in TCU’s permanent art collection. In June of that same year, Perera was one of six grand finalist grant recipients of The New Normal: An Artist’s Response to COVID-19 fund. Perera’s works have also been collected by United Nations and Consulate ambassadors.

A passionate FWISD art educator of seven years, Perera teaches foundational and advanced art classes, including AP art. Perera has led eight students to the Visual Arts Scholastic Event (VASE) UIL State Qualifiers, two of whom have gone on to win the state award. Before teaching in the public sector, Perera was an adjunct professor at Tarrant County College.

Jeffrey Smith has been actively involved in the performing arts community for more than 35 years. Combining his theater experience with a passion for learning, he has held the roles of teacher, administrator, high school principal, consultant and, most recently, orchestrator of the revival of Fort Worth’s historic Isis Theater, now called Downtown Cowtown at the Isis.

Smith earned a bachelor’s degree from Texas Tech University in Theatre Arts and Communications and a Master of Education Administration from Lamar University, and he is currently a doctoral candidate at Baylor University, graduating this fall. He spent years in the classroom as a theater teacher, building powerful live theater programs in various high schools in the DFW metroplex. He then moved into administration, serving as a house principal and principal, always with a focus on improving performance in the classroom for both teachers and students. During his tenures, Jeffrey also served as a theater-arts consultant on multiple new constructions, advising architectural companies in their design and build of performing arts spaces. He continues to work with theater companies throughout the state of Texas.

Smith considers himself a lifelong learner, an advocate for students and the arts and a believer in everyone’s innate ability to create positive social change. He is the proud husband of Debbie Garrett Smith and father to four kids ranging in age from 13 to 30.

Dana Schultes is the executive producer for Stage West, one of the premiere regional live theaters in the Southwest. Within the industry, she wears many hats, including development officer, director, educator and stage manager, as well as stage, screen and voice-over actor. Schultes received her Bachelor of Fine Arts from Texas Wesleyan, graduating magna cum laude. She has well over 100 professional stage credits to her name and is passionate about sharing theater with the community at large. In her time with Stage West, she has created many outreach programs, such as the Neighborhood Play Contest, the Southwest Playwriting Competition and the Festival of the Kid.

Since Schultes joined the company in 2004, Stage West has grown six-fold. Schultes has been instrumental in raising $4.5 million toward a comprehensive campaign to renovate the theater’s Vickery Boulevard home. Those renovations are expected to be completed during the summer of 2021, just before the launch of Stage West’s 43rd season. Schultes also serves as a CASA (Court Appointed Special Advocate), an election judge and as a member of the Fort Worth Chamber Southside Council. She has received numerous awards and citations, including induction into the Fort Worth Business Press’ 40 Under 40, the Great Women of Texas Class of 2018 and the Klein Watts Award for Cultural Contribution.

Art&Seek connects North Texans with the people and places that define the arts community. Through in-depth reports, artist profiles and immersive online content, Art&Seek's award-winning journalism covers all aspects of the visual and performing arts on KERA 90.1 and artandseek.org. Art&Seek also features more than 3,000 arts organizations on its comprehensive online events calendar. The Art&Seek Calendar allows users to search for activities in their neighborhood and across North Texas, with links to buy tickets, find directions and more.

The museum’s 1972 building, designed by the American architect Louis I. Kahn, is widely regarded as one of the outstanding architectural achievements of the modern era. A second building, designed by Italian architect Renzo Piano, opened in 2013 and now provides space for special exhibitions, dedicated classrooms and a 289-seat auditorium with excellent acoustics for music. For more information, visit kimbellart.org.