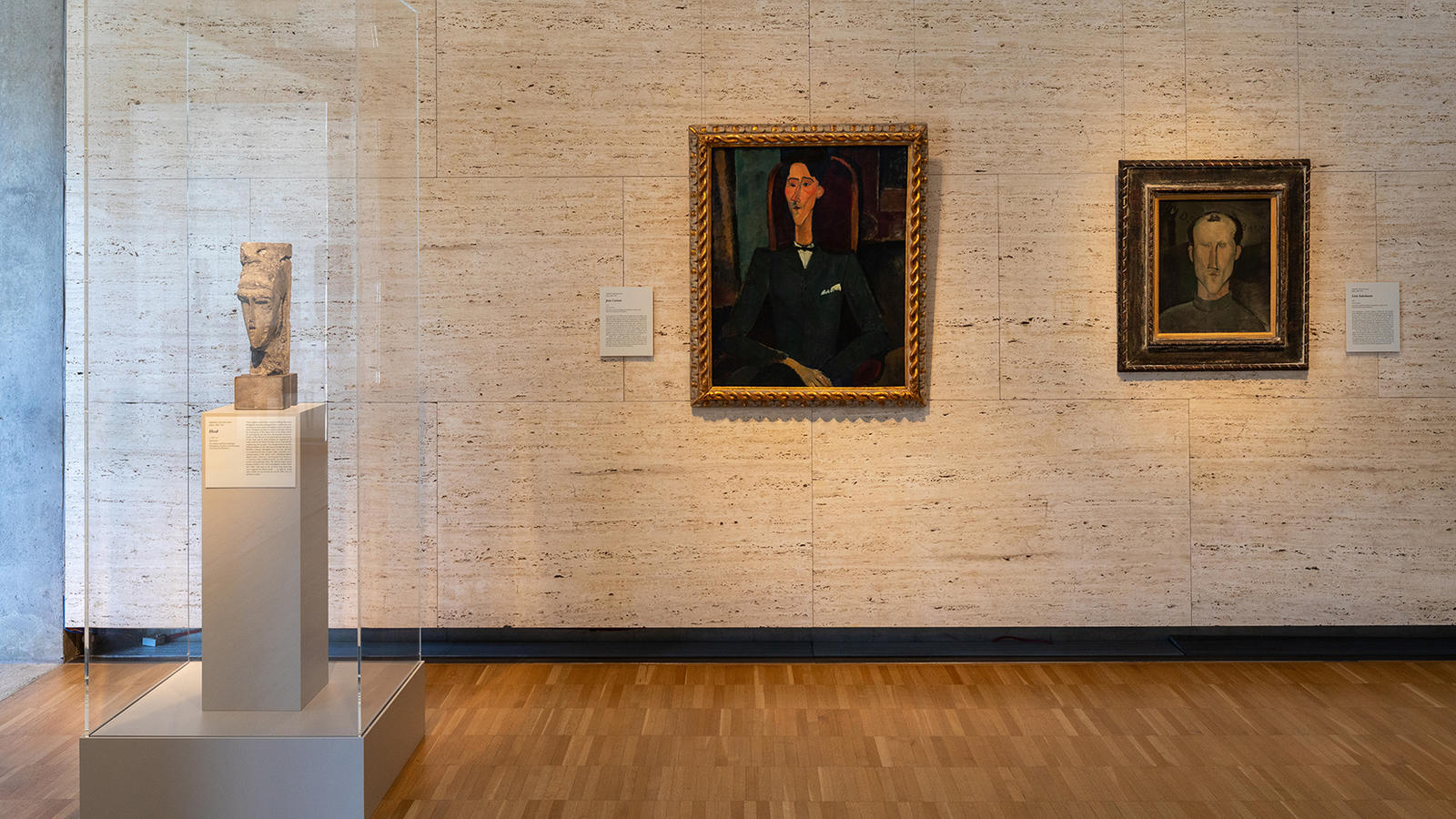 FORT WORTH, TX—Three works by Italian artist Amedeo Modigliani are on view in the Kimbell Art Museum’s galleries as “guests of honor.” Drawn from the Henry and Rose Pearlman Foundation and usually on loan to the Princeton University Art Museum, the three works include a limestone sculpture Head (c. 1910–11) and two paintings—portraits of the poet, designer and filmmaker Jean Cocteau (1916) and the Russian sculptor Léon Indenbaum (1916). These works are presented alongside the Kimbell’s Modigliani sculptural Head (c. 1913), which was given to the Kimbell in honor of Ted and Lucile Weiner by their daughter Gwendolyn in 2017.

Carved directly in stone, with a tension between figuration and abstraction, Modigliani’s sculptures were informed by works he admired in Paris, including West African, Egyptian, ancient Greek and Cambodian statuary as well as European prototypes. The Pearlman Foundation and Kimbell Head sculptures are two of approximately 27 known works that Modigliani made before he abandoned the medium. The two painted portraits of fellow members of the avant-garde express the artist’s signature language of elegant, often elongated geometric forms.

"The Henry and Rose Pearlman Foundation holds one of the most exceptional collections of Impressionist and modern work in the United States,” said Eric M. Lee, director of the Kimbell Art Museum. “We are thrilled to collaborate with the Pearlman Foundation and the Princeton University Art Museum to present these three important works by Modigliani alongside the Kimbell’s Modigliani sculpture.”

Born in 1884 in the Tuscan port of Livorno, Italy, to a Sephardic Jewish family, Amedeo Modigliani left his hometown in 1906 to join the Parisian avant-garde. His early paintings show influences from the works of artists like Henri de Toulouse-Lautrec and Pablo Picasso. However, Modigliani soon dedicated himself to sculpture, guided by Constantin Brancusi’s example of directly carving into stone. Modigliani produced a series of stylized, elongated stone heads (and two full figures) with slender necks and geometric features such as almond-shaped eyes and small, round mouths.

By 1914, due to health concerns and other practicalities, Modigliani abandoned sculpting in favor of painting, focusing primarily on portraiture and nude figures. Expressing his characteristic language of graceful, lengthened forms, his incisive portraits of fellow artists, writers and others in his circle—often outsiders or foreigners like Modigliani—likewise convey a transcendent universality, while at the same time revealing the distinctive personality of the sitters. Modigliani’s life was cut short: he died in 1920 at age 35 of tubercular meningitis, before achieving the worldwide acclaim as a pioneer of modern art that he would receive posthumously.

The three masterpieces from the Pearlman Foundation, along with the Kimbell sculpture, are on view together in the Kahn Building from January 21 through October 30, 2022. Admission to the permanent collection is always free.