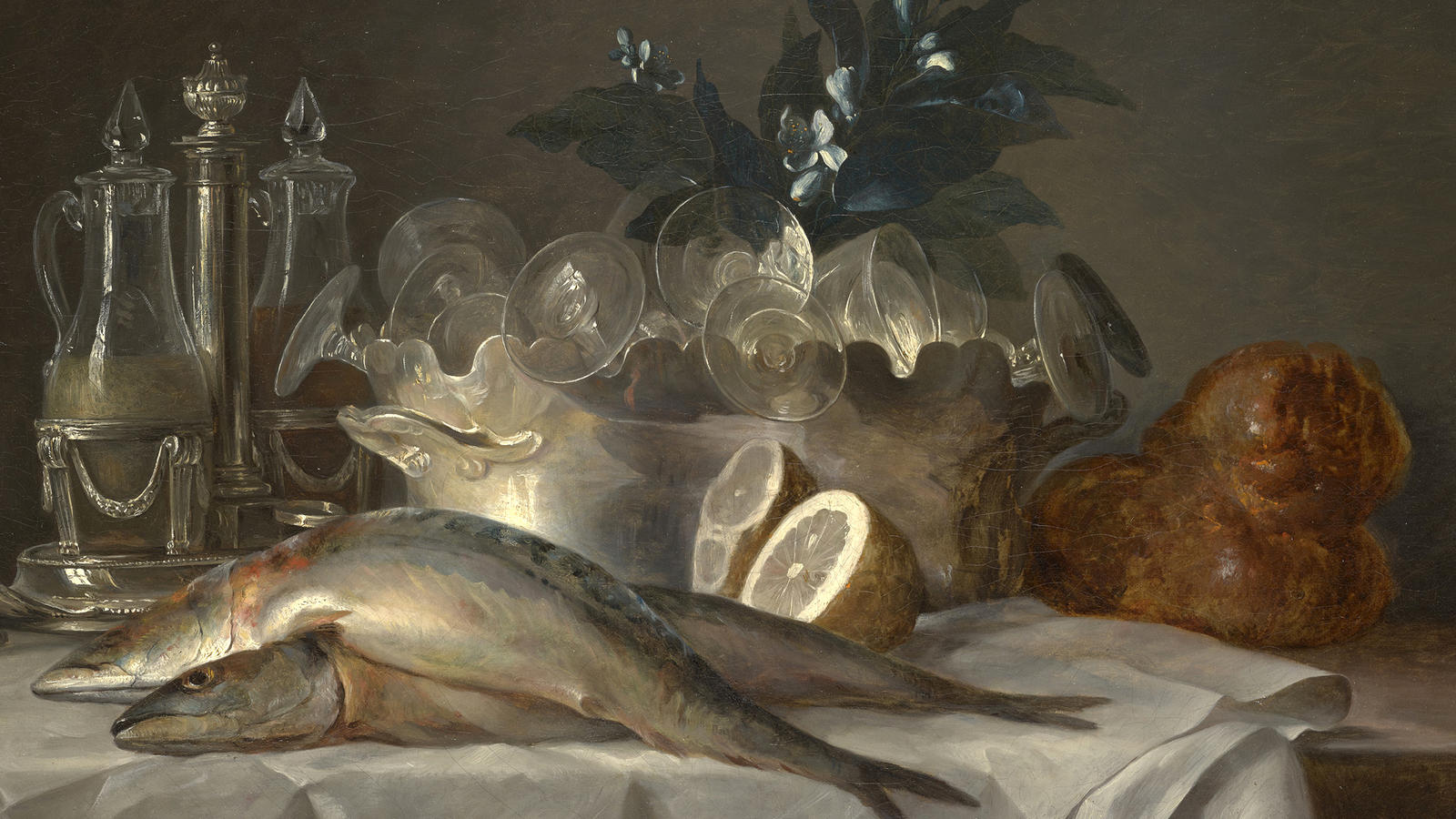 FORT WORTH, TX—The Kimbell Art Museum announced today the acquisition of Anne Vallayer-Coster’s 1787 painting Still Life with Mackerel. This striking work is among the most beautiful and innovative by one of the foremost still-life painters of 18th-century France. Vallayer-Coster (1744–1818) was esteemed for the vigor of her compositions, her magical ability to imitate nature, her fluid and varied brushwork and her remarkable skills as a colorist. The painting is a gift from Sid R. Bass in honor of Kay and Ben Fortson, long-time leaders of the Kimbell Art Foundation’s board of directors. Still Life with Mackerel is on view tomorrow, March 8, in celebration of International Women’s Day, in the Kimbell’s Louis I. Kahn Building. Admission to view the museum’s collection is always free.

“Anne Vallayer-Coster is one of the very few female artists who managed to negotiate the powerful authority of the Royal Academy in Paris and to exhibit their work at the Salon,” commented Eric M. Lee, director of the Kimbell Art Museum. “Her recognition as a leading painter of still life paralleled her contemporary Elizabeth Vigée Le Brun’s fame as a portraitist—both were favorites of Queen Marie-Antoinette. We are thrilled that Vallayer-Coster’s  Still Life with Mackerel will join Vigée Le Brun’s Self Portrait as a highlight in the Kimbell’s collection.”

The Kimbell’s painting is undoubtedly one of the most refined pictures produced by the artist. Still lifes of fish were rare in 18th-century France, where images of meat, fruits or flowers were more abundant. Vallayer-Coster’s charming, original composition celebrates the arrival of mackerel in Paris in springtime, when wealthy Parisians enjoyed the freshest specimens of this delectable fish. Arranged on a stone parapet covered by a linen cloth are a silver oil and vinegar cruet stand, a silver verrière (wine glass cooler) filled with crystal stemware, a lemon, a sprig of orange blossoms and a brioche (a rich pastry). The still life whets the viewer’s appetite for a simple but sumptuous feast with accoutrements that evoke an elegant, restrained opulence that marks the end of the century.

Vallayer-Coster’s virtuosity and sophistication as a colorist is evident throughout the work. The round and undulating forms of the composition are tempered by its prevailing cool, silvery tonality. The artist explores how these tones vary according to material and reflections of light—from glass and metal to the mutable skin of the plump fish, dazzlingly rendered with unblended strokes of brilliant vermilion and ocher near the gills, indicating its freshness. The reflections are sensitively observed—a lemon half seen again in the curving silver container takes on an unexpected double shape—and the white napkin or tablecloth likewise partakes in the nuances of light, all suggested with the painter’s delicacy of touch. The damask cloth cleverly mimics the type of linen the artist would have maintained in her own household: the initials V and C are embroidered in tiny red cross-stitch, along with the figure 6, an inventory number for the accounts of the painter’s housekeeper.

Born in Paris in 1744, Anne Vallayer (later Vallayer-Coster, upon her marriage in 1781) was the daughter of a goldsmith employed by the royal Gobelins Manufactory who later opened a shop near the Louvre and Tuileries Palace. Through her family, Vallayer-Coster came into contact with various eminent persons in both the artistic community and aristocratic circles. Little is known about her training, and it is likely that she was largely self-taught. By the age of 26, she was received and accepted as a member of the Académie Royale de Peinture et de Sculpture  (French Royal Academy of Painting and Sculpture). Very few women had previously achieved this distinction.

Upon her first exhibition at the Salon, Vallayer-Coster’s superior skills as a still-life painter were resoundingly commended. Her first two finished canvases exhibited—Attributes of Painting, Sculpture, and Architecture and Attributes of Music (1769 and 1770, Musée du Louvre), were highly accomplished works demonstrating her virtuosity in rendering textures and brilliant color and evident homages to the pre-eminent still-life painter Chardin’s similar grand allegories of 1765. Likewise, her Still Life with Mackerel could be compared with the simple kitchen still lifes that Chardin produced in the last years of his career. These intimate paintings contrast with the floral compositions for which Vallayer was renowned. 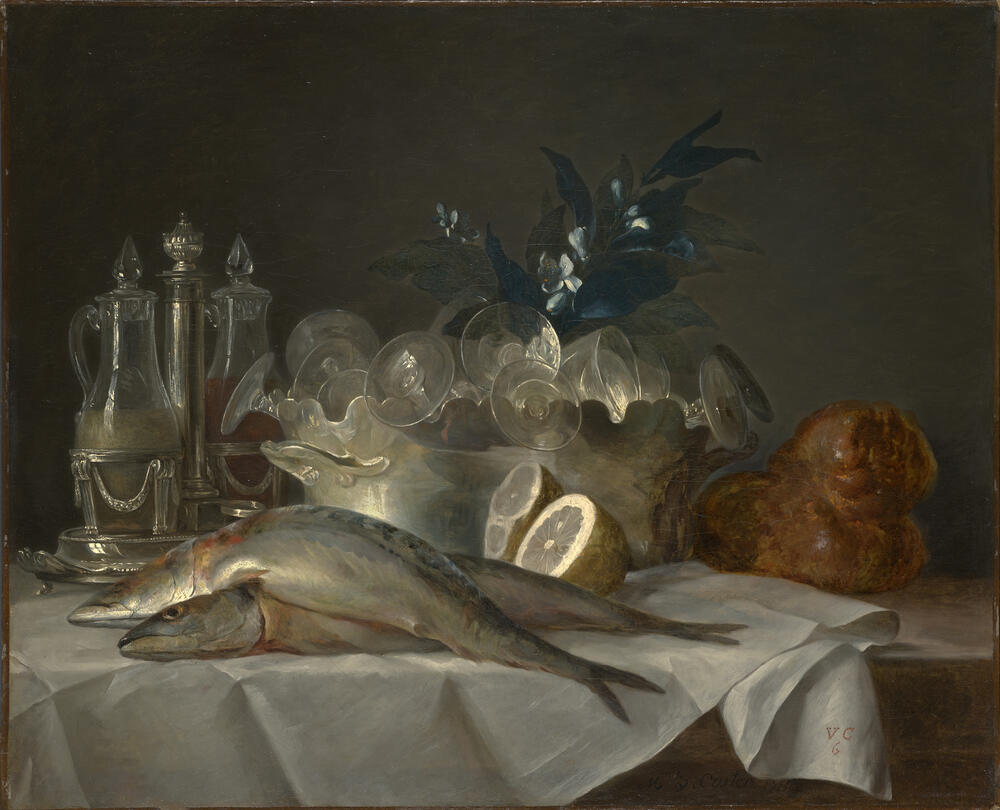