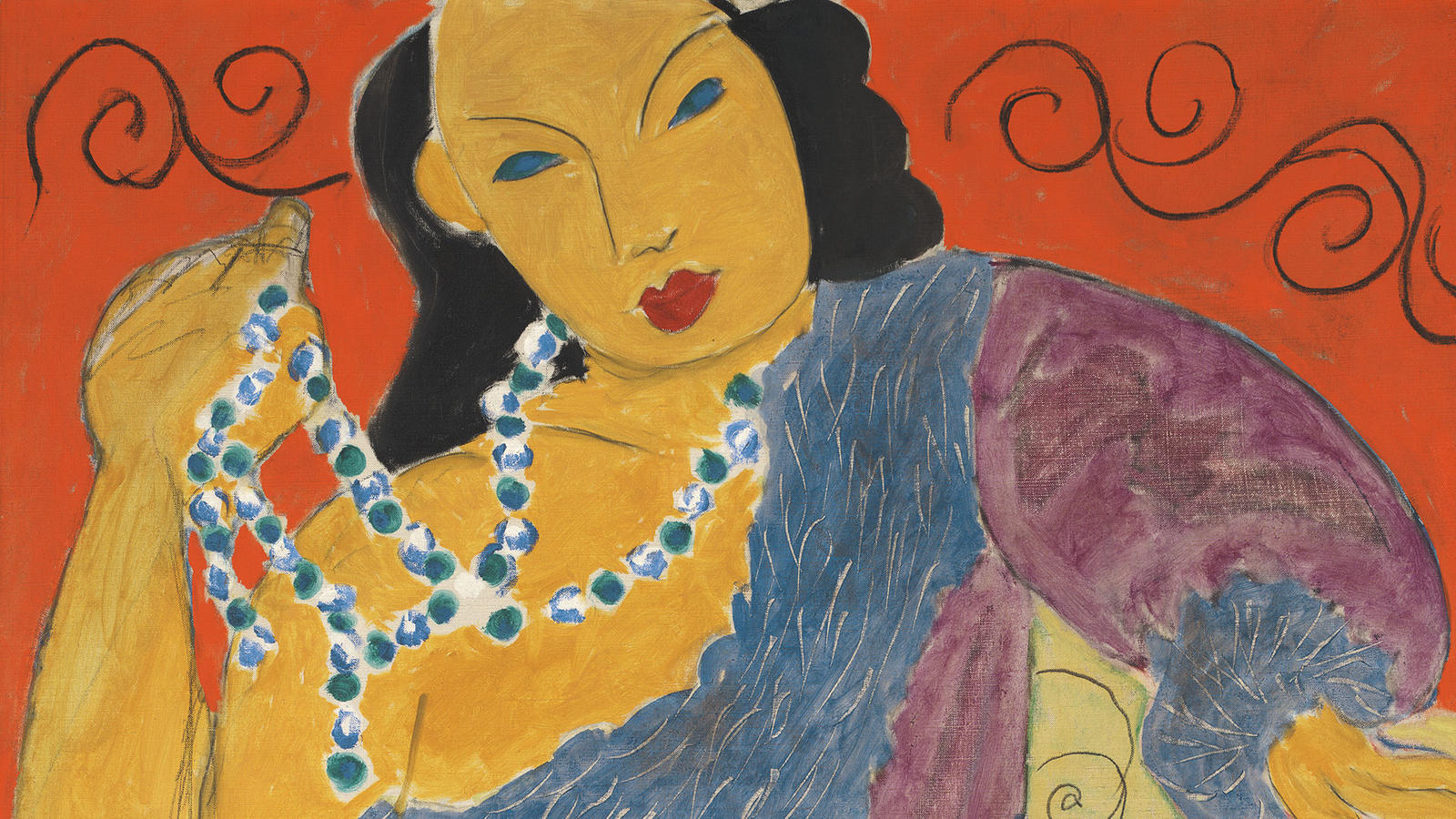 The 1999 exhibition Matisse and Picasso: A Gentle Rivalry provided visitors to the Kimbell Art Museum with the rare opportunity to appreciate Henri Matisse’s luminous painting L’Asie (Asia) alongside other great works from the artist’s Vence period, including The Rocaille Armchair (1946; Musée Matisse, Nice), Interior with Egyptian Curtain (1948; The Phillips Collection, Washington, DC), and Large Red Interior (1948; Musée National d’Art Moderne, Paris), as well as important works by Pablo Picasso of the same period, such as Woman with Blue Hands (1947; private collection). Picasso, in fact, saw L’Asie shortly after its completion in mid-March 1946, during his first postwar visit to Matisse’s studio at Le Rêve, in Vence. Later that spring, it was one of two paintings that Matisse lent to his friend Pierre Bonnard, who wrote of the picture: “The red there is wonderful late in the afternoon . . . what an intense life the colors have, and how they vary with the light! I make discoveries everyday, and I have you to thank for this pleasure and instruction.”

The thinly painted surface of L’Asie, with its fluid and seemingly rapid, spontaneous drawing, possesses an appearance of effortlessness that masks the actual labors through which it was produced. An inspection of L’Asie at the Kimbell Art Museum offered new evidence of the painstaking efforts Matisse made in creating this late masterpiece, called his most ambitious work of 1946, with its startling intensity of color, animated drawing, and lightness of handling. Examination of the painting with infrared reflectography uncovered traces of an earlier state of the picture—signed and dated by Matisse in 1946—hitherto unacknowledged in the literature on the painting. This state corresponds to a black-and-white photograph of L’Asie published in Alfred Barr’s 1951 book Matisse: His Art and His Public. This photograph—provided from the collection of Matisse’s grandson, Claude Duthuit, and the Matisse Archives, and published during the artist’s lifetime, just five years after L’Asie was completed—does not represent the present appearance of the painting. The photograph shows L’Asie with a black quadrant in the lower left, enlivened by arabesque lines, and a signature and date that were scratched into the paint, revealing the brilliant white ground. In L’Asie’s finished state, Matisse converted this area to a flaming red, thereby unifying the background as a decorative space, and redrew the arabesque lines as well as his signature and date with black crayon. The present version of L’Asie corresponds to the one recorded in the first color reproduction of the painting in the October 1948 issue of Verve (6, nos. 21–22). Because paint layers that do not reflect light in the infrared range, such as the red background of L’Asie, become transparent when the painting is analyzed with the infrared camera, the underdrawing from the earlier state was detected during the examination. Residues of black paint from the first background had become deposited in the inscribed lines, probably when Matisse wiped away or “erased” the black paint with turpentine to prepare the area for his revision. The contrast of these black lines against the white ground helped produce a relatively clear image of the underdrawing when viewed under infrared light.

Matisse’s practice of reworking his paintings is well known. As Yve-Alain Bois observes, “the spontaneous look of (his) canvases is the result of an elaborate, slow method.” The artist often arrived at the finished state of a painting through several intermediate stages, “erasing” passages from earlier states as he worked to achieve the final result. As early as 1909, Matisse would document the progress of a painting with a series of photographs; Large Reclining Nude (1935; The Baltimore Museum of Art), which was featured in the Kimbell’s exhibition, is among the many seminal works whose revision Matisse methodically recorded. Through these photographs, Matisse apparently wished to validate his painting by conveying the difficulty with which he arrived at a finished work. In December 1945, during the period when he began work on L’Asie, Matisse exhibited The Dream (1940; private collection) alongside fourteen progress photographs and Still Life with a Magnolia (1941; Musée National d’Art Moderne, Paris). As Bois notes, the decision to exhibit photographs of earlier states together with original paintings reflected Matisse’s “escalating fear that the younger generation of artists would misjudge his pictures as being quickly and easily done.”

Unvarnished and unlined, L’Asie is in excellent condition. The surface is alive with a variety of visual effects. The brilliant white dress and necklace are suggested with an economy of brushstrokes on the exposed white ground, while the blue fur stole and cuff are animated with lines freely scratched into fluid brushwork. Matisse suggested the texture of velvet in the purple robe by scraping away paint to convey the nap of the fabric, but he allowed freely applied zigzag strokes to define the edges. The model’s vivid orange skin tones are created with diverse brushwork with varying degrees of opacity, as is the fiery red background. The treatment of these flat areas of color helps to generate a palpable sense of energy on a canvas that seems to radiate light. The immediacy of the surface of L’Asie was apparently the result Matisse was after, as he wrote to Henry Clifford in 1948, at the time of the Philadelphia Museum retrospective: “I have always to hide my own efforts and wanted my work to have the lightness and joyousness of a springtime which never lets anyone suspect the labors it has cost.” There is perhaps a contradiction in Matisse’s desire to document his revisions with progress photographs on the one hand and “to hide (his) efforts” on the other. Moreover, perhaps he simply wanted to preserve through the erasure process the delicacy of the paint surface in the course of editing his work.

The freshness of the surface of L’Asie is due to the fastidiousness with which Matisse made his changes. The only clue to suggest his revision of the lower-left quadrant can be detected on the reverse of the canvas. Turpentine used by the artist to wipe away the black paint from the earlier state soaked through to the reverse and stained the area. Staining on the reverse of the upper-right background suggests that he may have reworked this area as well. On close examination of the paint surface of L’Asie, halos of blue paint can be seen around the upper-left and right edges of the figure, suggesting the background may once have been blue. This area also bears trace of a partial signature: an inscribed “M,” now concealed with red paint.

The previously unidentified earlier state of L’Asie documented in the Duthuit photograph may have been only one of several revisions before Matisse brought the painting to its brilliant conclusion. The significance of this version, however, rests on the fact that it was signed and dated as well as photographed by the artist. The alteration of L’Asieconfirms Matisse’s studied and meticulous working methods and his knack for erasing earlier passages to maintain the spontaneous appearance of his paint surface. By changing the lower-left quadrant from black to red, the artist was both simplifying the background of L’Asie and amplifying its color, with a red so dazzling that it seems to bounce light off the surface. It is a credit to Matisse’s artistic vision that such a simple change—almost as if he were cutting away this black shape with scissors and replacing it with a red one—could produce such a profound transformation in L’Asie. The nature of his revision may reflect Matisse’s new fascination with cutouts, which began in 1943 and to which he would devote his energies in his last years, even as it anticipates his radiant Vence interiors, from his last great series of paintings. 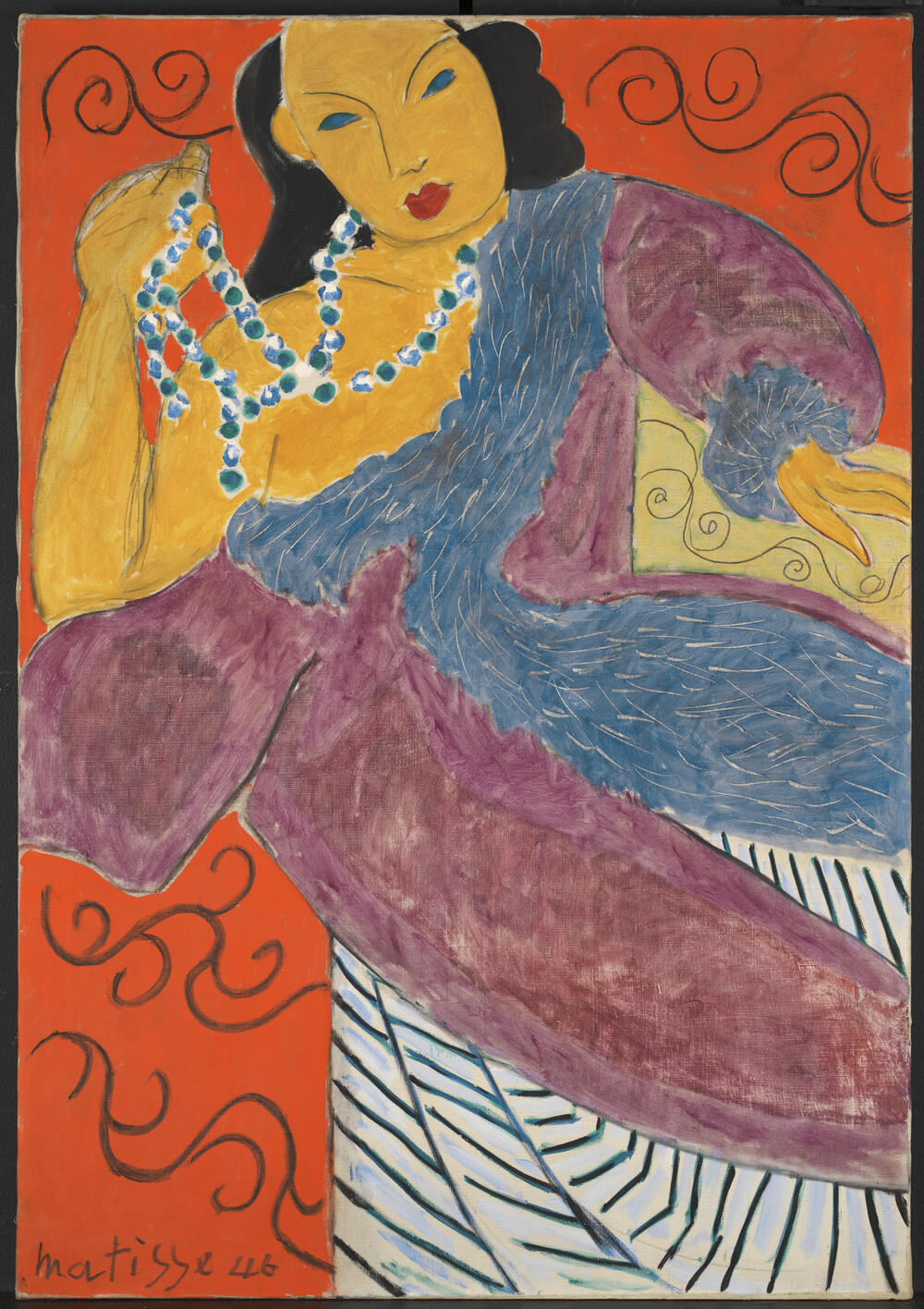 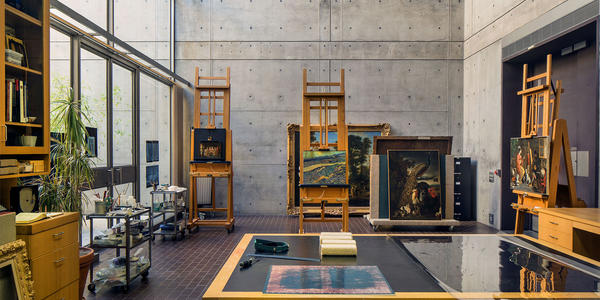 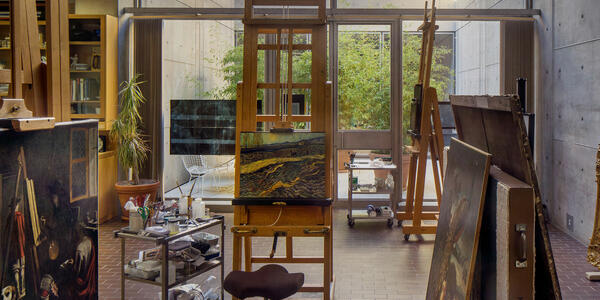 All visitors over the age of two must wear a mask over the nose and mouth while indoors at the Kimbell Art Museum. Please review our visitor guidelines to prepare for your visit.