On its 50th anniversary, the Kimbell Art Museum has acquired three artworks that demonstrate the institution’s dedication to collecting and exhibiting objects that speak to the transcendent power of art: a bronze vessel from China’s Shang dynasty (c. 1600–1050 BC); a larger-than- life-sized sculpture, The Mountain (La Montagne), designed by Aristide Maillol in 1937 and cast posthumously; and a 16th-century alabaster statue, Virgin and Child, from the Atelier of Saint-Léger in Troyes, France. The new acquisitions have been unveiled this week during the Kimbell’s anniversary celebrations.

“Each object in the Kimbell’s collection of just over 350 works is a masterwork of its respective period or movement, illuminating individual high points of aesthetic beauty and historical importance. The three pieces we have added to the collection are no different: one of the finest examples of an ancient gu ritual wine vessel, a monumental sculpture by Aristide Maillol, and a masterpiece from the Atelier of Saint-Léger,” said Eric M. Lee, director of the Kimbell Art Museum. “Each addition to the Kimbell’s collection must meet the highest standard, and the acquisition of these three exemplary objects from diverse cultures, timed to the museum’s 50th anniversary, is a special moment.” 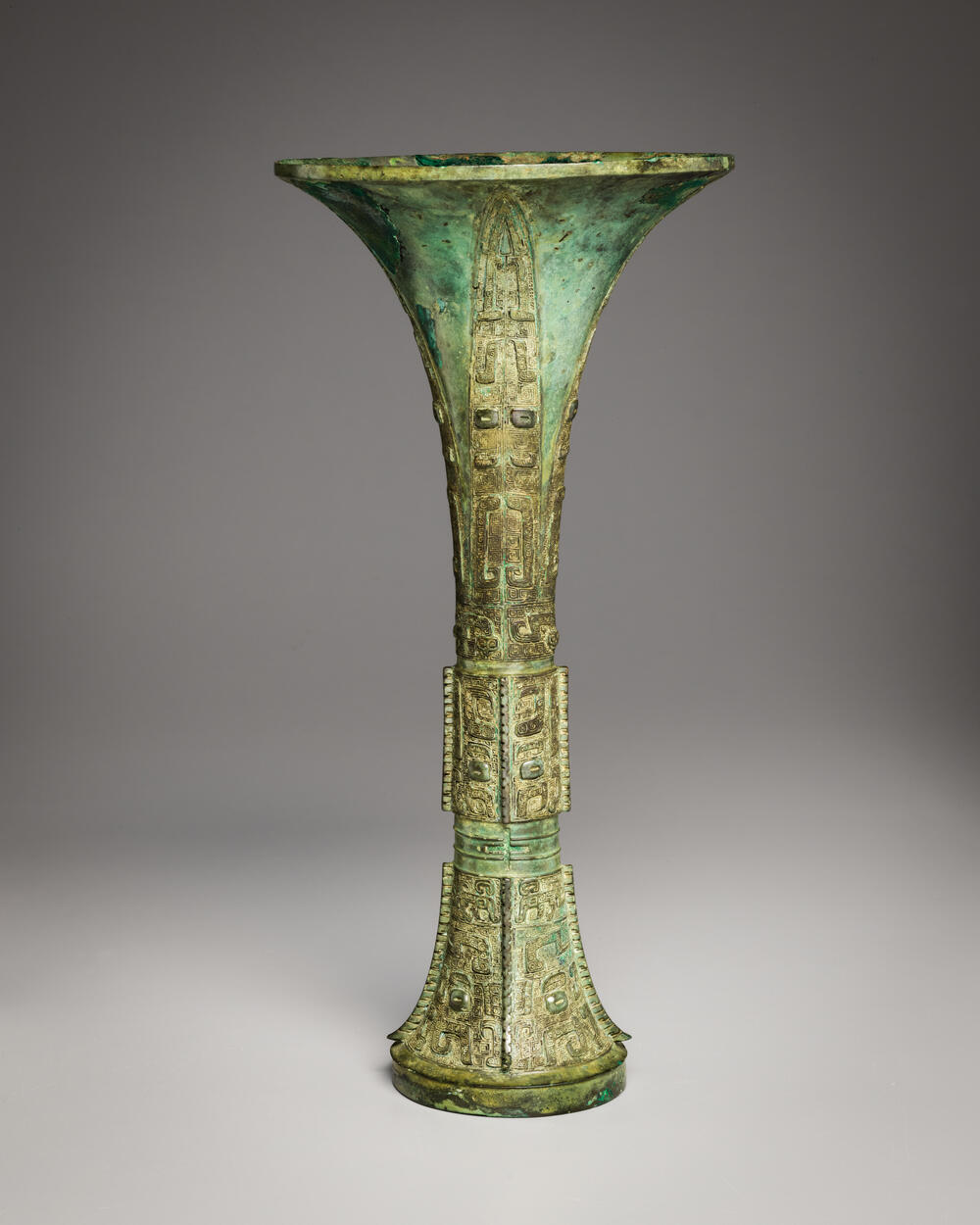 The Gu Wine Vessel—dating to about the 12th century BC, possibly from the Henan province of China—is a superb example of one of the most significant of all ancient Chinese bronze vessel shapes. During the Shang dynasty, these vessels were used in rituals to summon communication with ancestors or gods and to give offerings of food and drink. They were then often buried in tombs with their owners.

With its taut and graceful silhouette, this elegant gu—a tall wine beaker with a trumpet-shaped mouth and a slightly flared base — is composed of three distinct vertical sections. The high-relief decoration is made up of varied taotie—stylized animal mask designs representing fantastical creatures thought to symbolize spiritual power—assembled from isolated raised elements covered with rounded spiral leiwen (thunder pattern) on a ground of squared spiral leiwen. The upper register is decorated with four crisply designed blade motifs, evoking cicadas as a symbol of regeneration, above a frieze of wiggling silkworms or serpents with bulging eyes. The central register and foot, each divided by four notched vertical flanges, also feature taotie and leiwen elements and a frieze of kui (one-legged dragons with curled snouts).

With its excellent condition, crispness of design, lovely patina and a rare inscription cast inside the base naming an administrative title, the Kimbell’s gu is one of the finest of its type to be found in an American institution and will anchor the museum’s collection of ancient Chinese art. 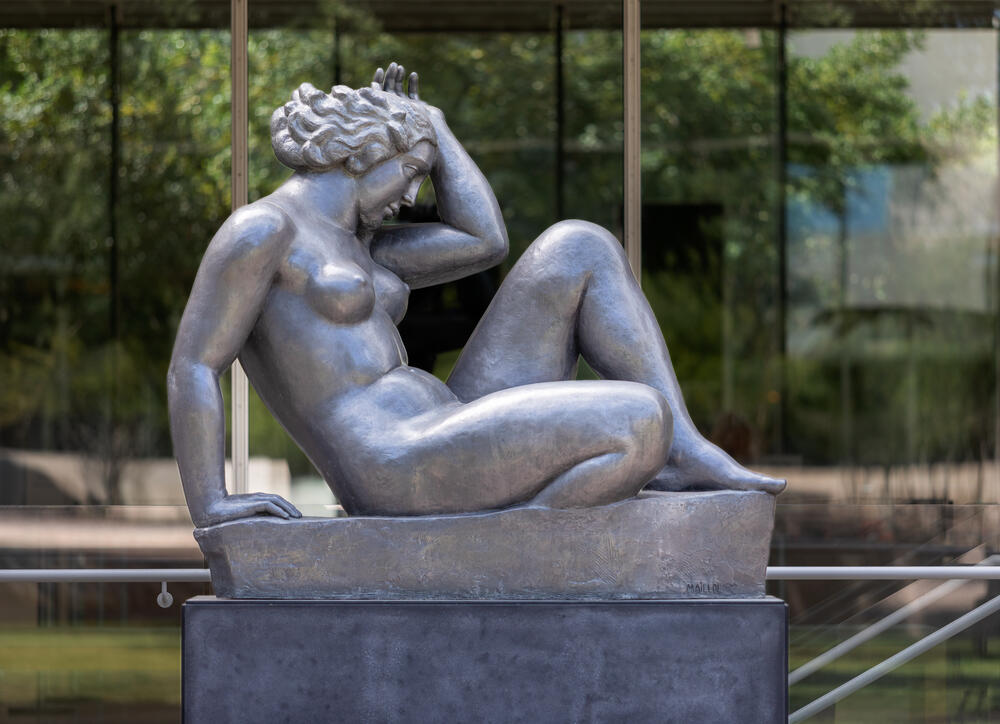 Part of a gift from the late Anne W. Marion, a longtime Kimbell Art Foundation board member and dedicated patron of the arts in Fort Worth, The Mountain (La Montagne) by Aristide Maillol (French, 1861– 1944) has also joined the Kimbell collection. Maillol’s Mountain was originally commissioned by the French State as an over-life-sized stone statue and later cast in an edition of monumental lead sculptures; the Kimbell’s cast will be installed outside the Kimbell’s Renzo Piano Pavilion.

The sculpture joins L’Air, a bronze sculpture by Maillol that Louis I. Kahn himself placed in his building’s courtyard when it opened in 1972. Both sculptures demonstrate the artist’s explorations of the female nude, the figure posed to express the grace and harmony of its forms, its stable geometry and its solidity. The actual model for The Mountain was a young Russian woman, Dina Vierny, who also posed for L’Air, created in 1938. Harking back to The Mediterranean, Maillol’s early essay on the seated figure from the early 1900s, the artist introduced an element of movement in The Mountain. The figure’s right leg seems to emerge from the earth, and her body is stabilized by the triangle of her raised left leg. Her torso leans back slightly, while the axis of the right arm presses downward and the left hand of her bent arm fans above the head as if warding off the wind rippling through her hair. 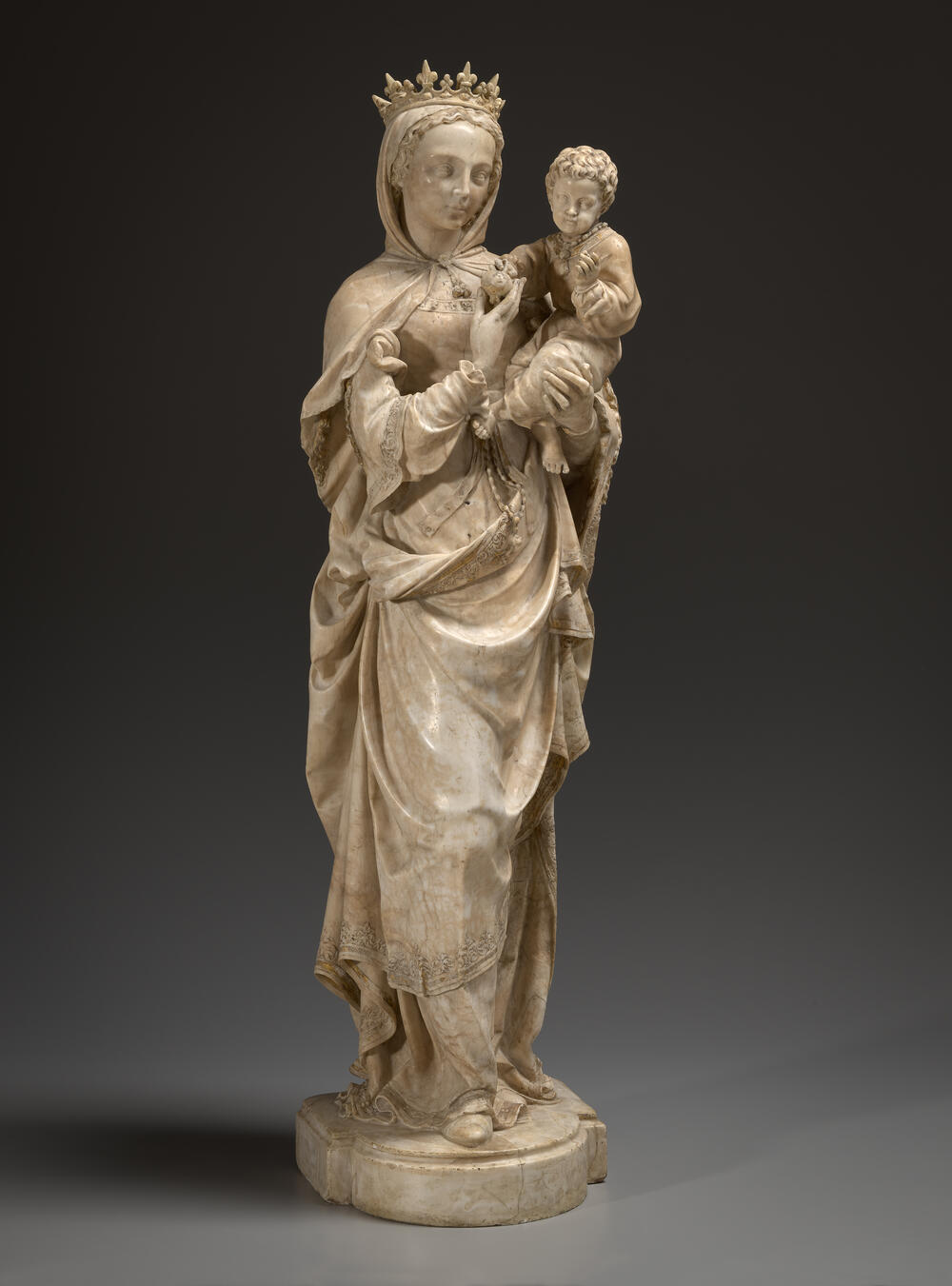 The third acquisition is an alabaster sculpture of the Virgin and Child created in the city of Troyes, in northeast France, in the early 1530s. After the Hundred Years’ War between the French and English, Troyes emerged as a leading center for commerce with nobles, churches and rich tradespeople commissioning works of art–specifically sculptures—to adorn places of worship. The sculptures made in Troyes in this period of effulgence are considered among the most beautiful to come from Renaissance France, yet the names of the artists who carved them are not always known; the Kimbell’s figure is thought to have been made in the “Atelier of Saint-Léger,” a workshop active in the period.

Fashioned from alabaster rather than the local limestone from the Champagne region, the sculpture includes many subtle details: delicately rendered hands, elegant ribbons and beads, and luxurious embroidery. In areas of the Virgin’s richly ornamented robe, the master carver was able to thin the soft alabaster so that the folds of cloth are virtually transparent. This refinement, enhanced by the traces of gold applied to the border of the mantle and to the curls of the Virgin’s hair, gives to the stone something of the precious luminosity of ivory. Together, these effects convey the vivid grace of the mother and her beloved child, who reaches out to touch the pomegranate she holds up—a symbol of his resurrection and everlasting life. Since leaving private hands in recent years, the Kimbell’s Virgin and Child has been the subject of notable scholarship.