The Kimbell Art Museum has acquired Dog Guarding a Basket of Grapes, an impressive painting by Ferdinand Georg Waldmüller, one of the most important and innovative Austrian artists of the nineteenth century. Merging several genres, Dog Guarding a Basket of Grapes (1836) demonstrates Waldmüller’s mastery of animal portraiture, still life, and landscape, as well as his uncanny ability to capture diverse textures and surfaces, such as the downy fur of the watchdog, the varicolored hues of the grapes, and the dusky atmosphere of the background.

Dog Guarding a Basket of Grapes will be unveiled on August 26, #NationalDogDay, at the Kimbell, and installed with the permanent collection in the museum’s iconic Louis I. Kahn Building.

“When making acquisitions, we focus on works of outstanding merit and aesthetic quality,” said Eric M. Lee, director of the Kimbell Art Museum. “We are proud to welcome this remarkable painting into our collection—the first work by an Austrian artist at the Kimbell—and to share it with the public for the first time in more than fifty years.” 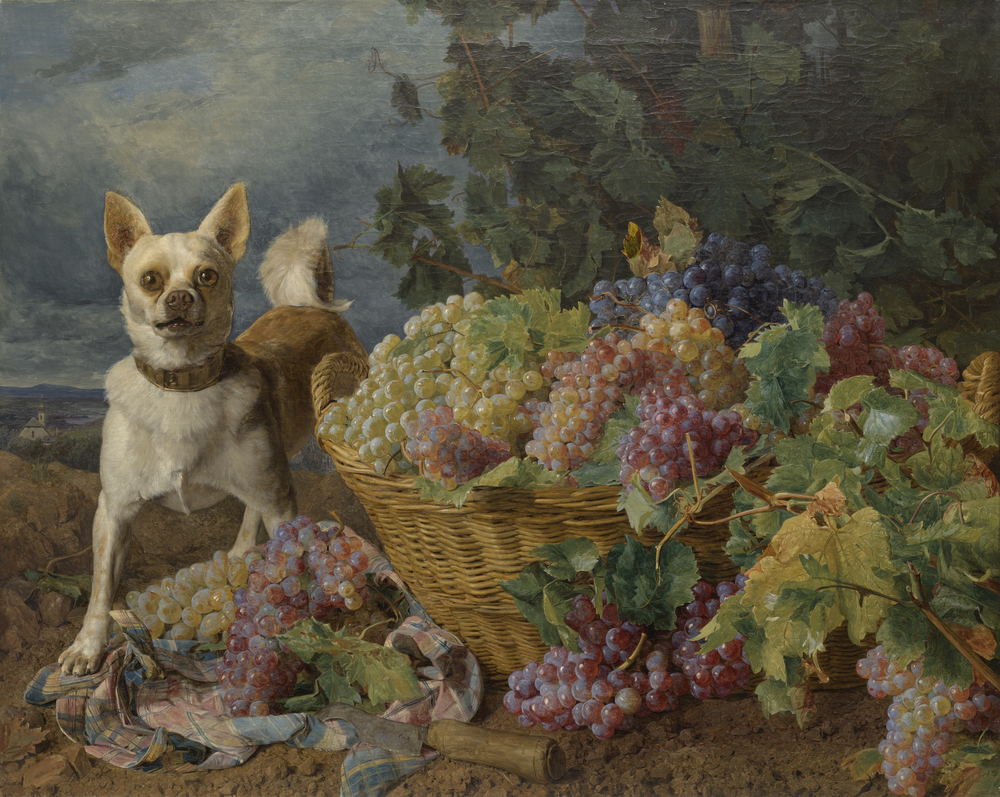 Ferdinand Georg Waldmüller (1793–1865) was one of the most important and innovative Austrian painters of the nineteenth century, from the defeat of Napoleon in 1815 to the 1848 Revolutions. He transformed the significant genres of his time—portraiture, still life, landscape, and genre paintings.  Waldmüller earned a reputation for his highly realist yet sympathetic portraits of the nobility, the bourgeoisie, fellow artists, and intellectuals. An early practitioner of plein-air painting, he produced commanding landscapes of the Austrian countryside and the majestic oaks outside Vienna. His mastery of flower painting was unrivalled.  A professor of the Vienna Academy of Fine Arts, he influenced a generation of artists, but his relations with the Academy deteriorated due to his combative campaigns for academic reform and his uncompromising conviction that truth to nature was essential to artistic creativity. Through the intervention of Emperor Franz I of Austria, he was reinstated in the Academy and knighted shortly before his death in 1865. Although Waldmüller’s work was neglected after his death, by 1900 there was renewed appreciation for the originality and wide repertoire of his paintings, his unconventional outlook, and his progressive ideas about art and art education.

Dog Guarding a Basket of Grapes merges still life with a remarkable animal portrait and striking landscape. Set in a vineyard, a large wicker fruit basket overflows with freshly cut clusters of grapes. An alert dog to the left, who keeps watch over this bounty, commandeers the picture. Its features—pointed ears, bulging amber eyes, and curled tail— suggest it is a locally bred miniature guard dog or pinscher, of the type common on farms at the time. Facing the viewer, the dog places a paw on a plaid cloth upon which rest more bunches of grapes and a harvesting knife. The dusky clouded background offsets the violet, blue, and honey hues of the varicolored grapes. Throughout, Waldermüller demonstrates his uncanny ability to describe the differing textures and surfaces of materials, from fabric to fur, metal to wicker, fruit to foliage. The landscape unfolding at left offers a splendid view from the foreground terrain, down the hills to the belltower of the parish church of Heiligenstadt and on to the Danube River and slate blue mountains in the far distance.

Signed and dated ‘Waldmüller 1836’, Dog Guarding a Basket of Grapes was exhibited at the Vienna Academy for Art in 1837, prompting a critic to write that “you can't help but laugh when you look at the picture." That same year, it was owned by the textile manufacturer and art collector Rudolf von Arthaber (1795–1893), who may have commissioned the painting. The grapes speak to Arthaber’s passion for viticulture; the plaid cloth may allude to his textile business, and the setting to his country estate in Ober Döbling, neighboring Heiligenstadt, on the outskirts of Vienna, built a few years earlier to house his celebrated picture gallery. Arthaber encouraged local viticulture with a competition, announced in 1837, for planting the largest acreage of vine varieties from the Rhineland, including white Rhenish Riesling.  The range of hues of the grapes in Waldmüller’s still life no doubt reflects such local varieties. A reverential rendering of the beauty and bounty of the Viennese countryside is brought down to earth by the dog’s comic role as sentinel for the vineyard. Waldmüller creates a fleeting and memorable moment in time in this highly original picture.

Celebrate #NationalDogDay and the Kimbell’s newest acquisition with canine-friendly activities on our lawn! 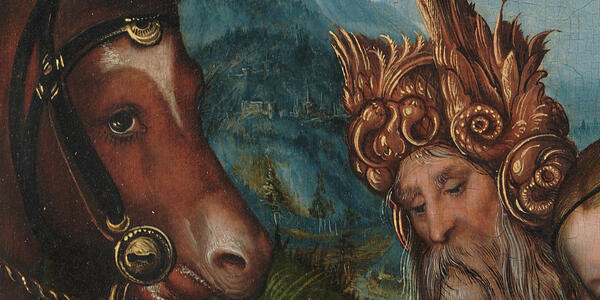 CALENDAR
Calendar
Back to top