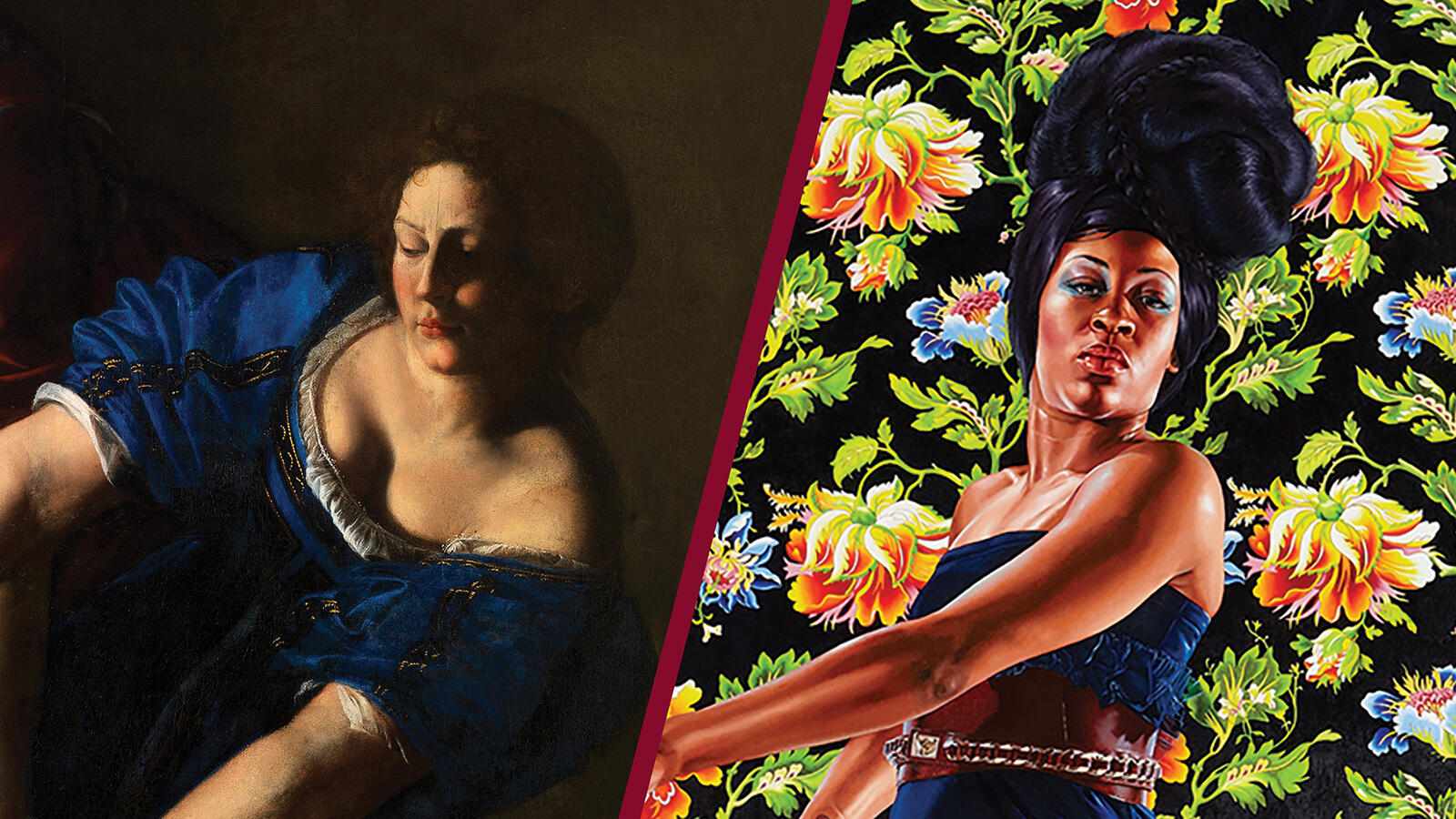 Two paintings depicting different versions of the story of Judith and Holofernes—one by Italian Baroque artist Artemisia Gentileschi and the other by American contemporary artist Kehinde Wiley—will be on view at the Kimbell for a limited time. Strikingly different renditions of the same subject realized exactly 400 years apart, the paintings will allow visitors to reflect on contemporary issues through a historical lens.

On view for free in the Kimbell’s Louis I. Kahn Building from July 19 to October 9, 2022, SLAY: Artemisia Gentileschi & Kehinde Wiley places the two stunning paintings in dialogue with one another, revealing shared narratives and ideas across time and culture. The subject of the two paintings, which appears repeatedly throughout art history, is taken from the apocryphal Old Testament Book of Judith. A Jewish town is under attack by the Assyrian army, led by the general Holofernes. Judith, a local widow, dresses in finery and visits the enemy camp with her maidservant under the pretense of helping Holofernes defeat the Israelites. After he falls asleep, she cuts his head off with his own sword. The army flees in the aftermath, and the Jewish people are liberated by Judith’s courageous act.

These two paintings of women in acts of courageous defiance and female empowerment stimulate discussion around gender, race, violence, oppression and social power—all of which have remained relevant from the 17th century to now. “The dynamics of power, the struggle for freedom and the triumph of the disenfranchised are fundamental themes in art and literature through the ages. Seeing these paintings together helps to sharpen our sensibilities and broaden our vision,” says Nancy E. Edwards, curator of European art and head of academic services at the Kimbell.

Gentileschi’s Judith and Holofernes returns to the Kimbell for the first time since its appearance in the 2020 special exhibition Flesh and Blood: Italian Masterpieces from the Capodimonte Museum. This painting is both a powerful statement of Gentileschi’s skill as an artist—which gained her much recognition during her lifetime—and a testament to the personal and professional adversity she overcame in establishing a successful painting practice at a time when the field was almost entirely male dominated.

Wiley is best known for his monumental portraits of young Black men placed in historical poses and settings adapted from Old Master paintings. He consistently addresses issues of race within art history while also commenting on contemporary culture, gender, identity, power and inequality. Judith and Holofernes, from Wiley’s first series of paintings to feature female subjects, is the first of the artist’s works to be displayed at the Kimbell. As in his earlier series, the artist used “street casting” to find his models. Wiley references a 17th-century painting by Giovanni Baglione, Judith and the Head of Holofernes, with the victor’s triumphant stance.

“At the Kimbell, we believe that art enables us to better understand ourselves and our world,” says Eric M. Lee, director of the Kimbell Art Museum. “We invite visitors to SLAY to explore the paintings’ pictorial power and their ability to communicate critical issues across time, place and culture.”

Organized by the Museo e Real Bosco di Capodimonte, the North Carolina Museum of Art, the Kimbell Art Museum and The Museum Box, this focus exhibition coincides with the special exhibitions The Language of Beauty in African Art, on view through July 31, 2022, and Murillo: From Heaven to Earth, on view September 18, 2022, to January 29, 2023, as well as with the Kimbell’s 50th Anniversary celebration, from October 4 to 8, 2022.

The exhibition is organized by the Museo e Real Bosco di Capodimonte, the North Carolina Museum of Art, the Kimbell Art Museum and The Museum Box.

The Kimbell is supported in part by Arts Fort Worth, the Texas Commission on the Arts and the National Endowment for the Arts. Promotional support is provided by American Airlines, NBC5 and PaperCity.

Admission to the museum’s permanent collection is always free.

Films
Revolutionary Painters across the Centuries: Gentileschi and Wiley

A recent documentary from the BBC explores the life of 17th-century painter Artemisia Gentileschi. Actor, writer and documentarian Michael Palin travels throughout Italy to unearth the artist’s finest paintings and the complex challenges she faced as a woman centuries ahead of her time. Against all odds, Gentileschi achieved success in a male-dominated world, and her work eventually became sought after in courts across Europe. Today, she is recognized as one of the greatest painters of the Baroque age and indeed one of the most important women painters in the history of art.

This intimate portrait of one of this generation’s most accomplished visionaries follows Kehinde Wiley as he embarks on a series of classical portraits of African American women whose poses are based on historical paintings. It documents the project as it unfolds—from concept to canvas and from casting models from the streets of New York to enlisting the fashion house Givenchy to create couture gowns for each woman.